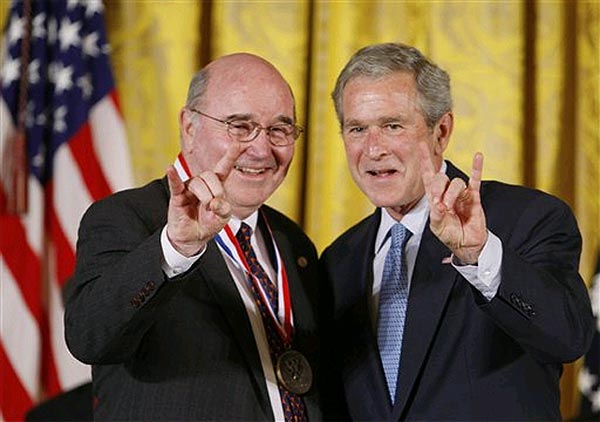 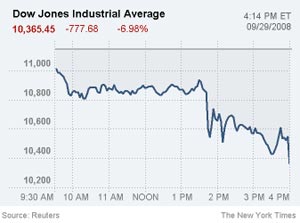 Earlier today, the House of Representatives failed to pass the bailout plan, 228 votes to 205 votes. It needed 218 votes for passage.

The Dow closed down 777 points, a decrease of about 7% and the S&P 500 was down 8.77%. It is the biggest drop since 1987. (For what it's worth, the NYSE's circuit breakers go in at 10%, 20% and 30% drops.) Zachary Karabell, president of River Twice Research told CNBC, "This is panic and ... fear run amok, Right now we are in a classic moment of a financial meltdown." And, via Dealbreaker, someone called C-Span: "We're all going to be eating peas and porridge. I hate the Republicans." 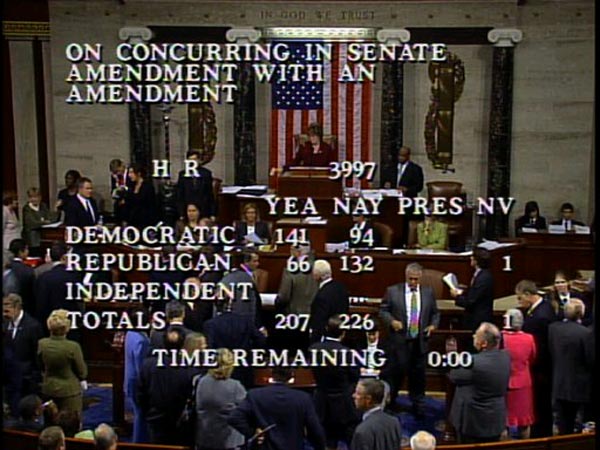 And President Bush has yet to give a comment, but after his earlier statement about the bailout legislation, he kept to his schedule and gave out the 2007 National Medals of Science and Technology and Innovation (perhaps in between calling House Republicans to urge them to pass the bill?). Update: Now Bush says, "We put forth a plan that was big because we got a big problem...I'm disappointed with the vote in Congress." Per Clusterstock, CNBC says the next vote won't be until Thursday.

Here's how the Representatives voted. Of New York's Representatives, four voted against the plan--Democrats Maurice Hinchey, Kirsten Gillibrand and Jose Serrano and Republican John "Randy" Kuhl. Serrano, who represents the Bronx, had a press release last week noting his "questions" (in quotations mark) about the plan: "When a person falls on hard times and needs food stamps, we are told they lack personal responsibility. When the biggest firms on Wall Street make outrageously risky investments, and fall on hard times, why are they not held personally responsible? Why do I have a feeling no one will go to jail for this scheme even though it could cost the taxpayers far more than any financial crisis in history?"

#bailout
#Congress
#president bush
#wall street
Do you know the scoop? Comment below or Send us a Tip