Last night, the House of Representatives passed legislation to avoid the so-called "fiscal cliff," voting 257 to 167 to not increase taxes on most of Americans while raising the taxes of the wealthiest to Clinton-era levels. The Washington Post reports, "House Speaker John A. Boehner (Ohio) and most other top GOP leaders took no public position on the measure and offered no public comment before the 10:45 p.m. vote. Boehner declined even to deliver his usual closing argument, leaving House Ways and Means Committee Chairman Dave Camp (R-Mich.) to defend the measure as the 'largest tax cut in American history.'"

Well, the tax cut is for everyone making under $400,000 (single income)/$450,000 (household income). President Obama was still glad a deal was made, even though everyone knew about it for 17 months, saying last night at 11:20 p.m., "The one thing that I think, hopefully, the new year will focus on is seeing if we can put a package like this together with a little bit less drama, a little less brinkmanship, and not scare the heck out of folks quite as much." If a deal hadn't been made, previously scheduled tax increases would have been in effect, which economists said would prompt a recession.

Eighty-five Republicans voted for the measure (PDF), along with 172 Democrats (see the vote breakdown here), while 151 Republicans and 16 Democrats voted against it. Boehner voted for it, while House Majority Leader Eric Cantor (R-Pennsylvania) voted against it. Politico says the Republican support for the bill is "a significant concession in the aftermath of Mitt Romney’s November defeat and a potentially existential moment for a party that has prided itself on a defiant and dogmatic dislike of tax increases... Among top party leaders and strategists, there’s a grudging recognition that the politics of taxation just aren’t what they used to be. In an age of fiscal anxiety, looming deficits and a potential entitlement meltdown, Americans aren’t flatly opposed to increasing taxes - at least, not for the wealthiest taxpayers." 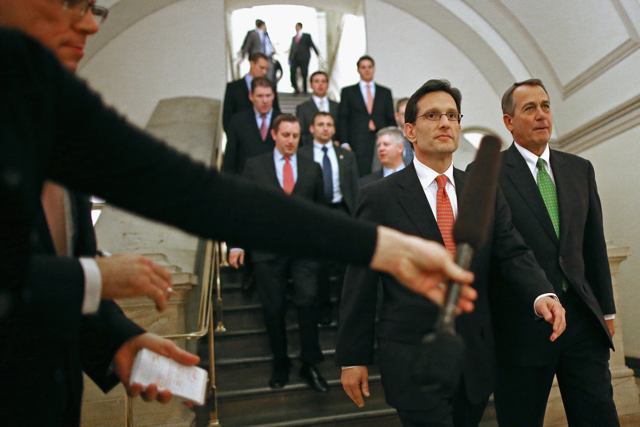 Last Friday, Obama had met with Boehner, Senate Leader Harry Reid (D-Nevada) and other party leaders to try to get a deal hammered out. The Senate managed to pass the legislation in the wee hours of New Year's Day. Now it's been reported that when Boehner saw Reid outside the Oval Office, he said, "Go f— yourself." From Politico:

“Go f— yourself,” Boehner sniped as he pointed his finger at Reid, according to multiple sources present.

Reid, a bit startled, replied: “What are you talking about?”

It's possible that Boehner was upset that Reid said he was running a "dictatorship" in the House. Or maybe he was just channeling his inner Cheney.