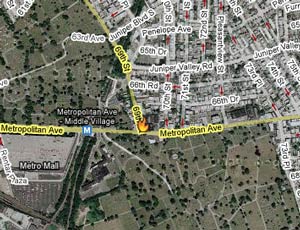 Early this morning, a fire ripped through a three story building with a store on the ground floor and apartments above. There has been one reported fatality so far, with three people critically injured and four more residents seriously injured. The proprietor of the ground floor deli said two people ran onto his store while on fire. He was able to douse them with water

The seven injured survivors have all been hospitalized. Witnesses described a harrowing scene as people had to escape the flames through their windows. One man apparently was standing on a ledge on the second floor, waiting to be rescued. A second man jumped from a third story window and brought both of them crashing to the ground. A third man jumped out of a separate window on the side of the building.

The fire was reported shortly after 7 a.m. this morning and it developed into a two alarm blaze. Investigators believe that the fire began in a hallway and spread to the building's stairwell, cutting off an evacuation route for tenants. Six firefighters were treated for injuries.