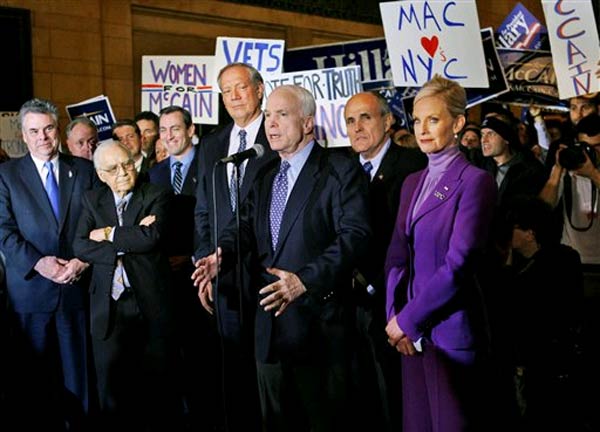 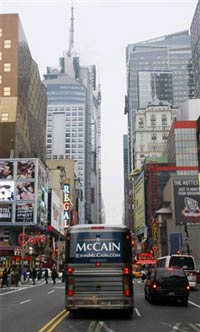 John McCain's Straight Talk Express headed into Manhattan today, taking him to Grand Central Terminal where he got the endorsement of former governor George Pataki. McCain, along with wife Cindy, appeared with Pataki, Alphonse D'Amato, Joseph Lieberman and Rudy Giuliani as the Republican candidate appears to be leading in many Super Tuesday polls over rivals Mitt Romney, Mike Huckabee and Ron Paul.

Pataki, who quite a few New Yorkers don't remember very fondly after his third term, said, "These are times that demand experienced, principled leadership. That leader is Senator John McCain. No one can bring the American people together in these challenging times better than John McCain." Giuliani said, "I lost every single primary to John McCain. Every one. He whipped me. But yesterday, I won a bet against John McCain," referring to the Giants' Super Bowl win.

MTA officials weren't alerted in advance of McCain's Grand Central Terminal event. However, McCain's staffers were able to produce "homemade" signs: Per the Village Voice, they read "Women for McCain" "Courage honor country MCCAIN" "Vote para McCain" "I'm a MCCAINIAC!" - and the bomb sniffing dogs made sure to smell them.

Photograph of the Straight Talk Express by Charles Dharapak/AP

Hillary Clinton was at Yale yesterday, and notably teared up, after her former mentor Penn Rhodeen introduced her warmly: "Now we hope you, our incomparable Hillary, will be president of the United States. Your friends here are lucky. We knew you when."

And Robert DeNiro stumped for Barack Obama in NJ, saying, "You know, that’s the kind of inexperience I can get used to. That’s the kind of inexperience our country deserves. But if this election were just to be decided on the quantity of experience, Dick Cheney would be our next president. I prefer the quality of Barack Obama’s experience." In recent days, Obama has closed in on Clinton's lead in NY and NJ.