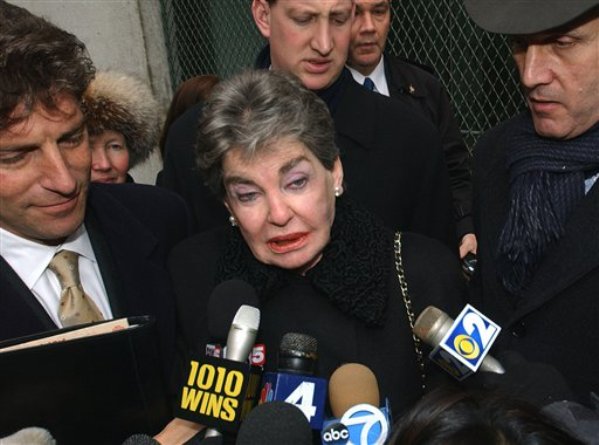 Leona Helmsley, whose conviction on tax evasion charges made her infamous beyond her repute as a hotelier and real estate developer, died today at age 87. She and her husband Harry Helmsley (who divorced his wife of 33 years to marry her) ran a $5 billion real estate empire that included the Empire State Building, 230 Park Avenue, Tudor-City, a number of hotels including the Park Lane, New York Helmsley, and Helmsley Palace, and much more.

Helmsley was born Lena Rosenthol in Ulster County and later grew up in Brooklyn, but she became known as the "Queen of Mean" when employees revealed she was a terrible boss and when she allegedly said, "We don't pay taxes. Only the little people pay taxes." Newsweek even put her on the cover with the headline "Rhymes with Rich" and detailed her "personal unkindness." The CityRoom offered this anecdote about her temper and her role as the symbol of the Helmsley brand:

Hotel employees throughout the Helmsley empire were aware of Mrs. Helmsley’s trigger temper and had arranged a warning system when she left her apartment en route to one of the hotels. But it was not until she starred in glossy advertisements for the hotels that she became a household name. The first ads, for the Harley, showed a smiling Mrs. Helmsley proclaiming that she wouldn’t settle for skimpy towels and couldn’t get along without a phone in the bath. She asked, “Why should you?” Occupancy rates skyrocketed.

Helmsley and her husband bought an estate in Greenwich, CT in 1983, and the remodeling and renovation costs added up to $8 million. The Helmsleys' unwillingness to pay contractors led the contractors to send invoices to the Post, that explained how the Helmsleys were charging their home renovation costs to other Helmsley properties.

You can learn more about the tax evasion case, the Helmsley real estate empire and Helmsley herself at Crime Library. Her spokesman Howard Rubenstein said, "Leona was a great businesswoman in her own right who created a tremendous brand and success with Helmsley Hotels and was a wonderful partner and wife to Harry Helmsley. She was extremely generous as a philanthropist and she gave tens of millions of dollars to charity right up until the last months of her life."