Hot-for-Student Teacher Could be Fired 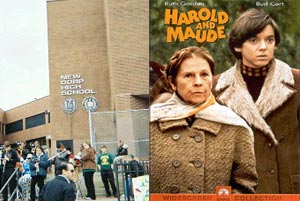 "My feelings for him are so strong, and I can't say or do anything. Today he was standing behind me so close I could feel the heat from his body radiate to me. I wanted to just let myself go, lean backwards and sink into him."
- A 2005 excerpt from Colleen McGraham's Xanga blog

A judge decided that the city can attempt to fire a Staten Island teacher who documented her crush on a student on her blog. According to the Staten Island Advance, New Dorp High school teacher Colleen McGraham "hounded the 11th-grader through instant messages and e-mails in 2005, when she was 36 and the student 15." She also visited his blog frequently.

McGraham also lent the student that May-December (of next year) classic, Harold & Maude, which he and his girlfriend watched uncomfortably. The student finally told another teacher, who then told school officials. When investigators spoke to McGraham, she said, "I don't want to hurt [the student] but I just fell for him and I know it's wrong. I don't know what happened."

Previously, an arbitrator suggested that 39-year-old Colleen McGraham would just serve 90-day unpaid suspension, but a State Supreme Court Justice found that decision "irrational" and contrary to the policy of protecting students. McGraham has been out of the schools since 2005, but on the payroll since then. The Daily News has an editorial questioning the difficulty the Department of Education has in firing employees.