The Russian drug Krokodil (chemically known as desomorphine) is a homemade heroin alternative that has made its way to the States from Russia, and it's now entered New York City. Recently Time magazine called it "the most horrifying drug in the world."

Before we go local, here's a primer: Krokodil was given its street name because of its nightmarish after effects. The drug—which also turned up in Illinois recently—will turn your skin scaly and green/yellow like a crocodile, it will then cause it to "harden, rot, and fall off," often in chunks. After that, you'll likely die—the average life expectancy for a user is around two years. It's not pretty: 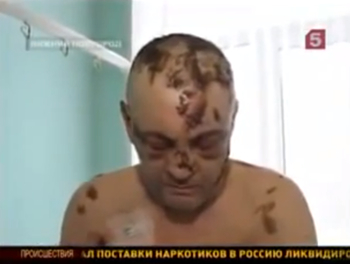 According to The Verge "it is being sold in at least two nightclubs in New York City’s trendy Meatpacking District," Le Bain and Westway.

"Sal Ramirez, who witnessed krokodil being used while serving in the Peace Corps in Kazakhstan, says he saw a man being thrown out of Le Bain, one of New York’s hottest clubs, after attempting to peddle krokodil. Ramirez was also directly approached by a dealer at another club, Westway, who tried to sell him krokodil and 'clean syringes' in the bathroom."

Ramirez believes the novelty of the drug may tempt some to try it out once, but warns it's "super addictive." So if for some reason you are procuring any drugs that require a syringe, think extra hard about it now, because you may end up like this:

Krokodil is made from codeine, iodine and red phosphorus (gasoline, paint thinner, alcohol) through a fairly simple process that yields an opioid "contaminated with various toxic and corrosive byproducts." Here are some images showing Krokodil being made, injected, and the horrifying results of being addicted to the drug—and these aren't even the most graphic photos showing the reality—for those, you can click here and here.

#drugs
#just say no
#krokodil
Do you know the scoop? Comment below or Send us a Tip