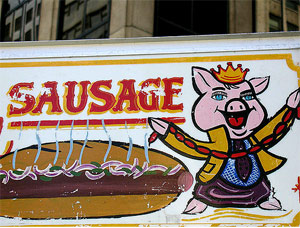 Having fun yet, Governor Spitzer? The new governor slogged through his first Legislative session by having a fight with Senate Majority Leader Joseph Bruno stall many possible deals. Spitzer said that Bruno's was blocking many issues, such as congestion pricing, campaign reform, and expanding the criminal DNA database, because Bruno wanted a half-billion dollar package for capital projects. Spitzer said, "much of [the package], if not most of it, [was] pork. It was dripping fat; it was a horrendous thing to look at."

Read how the two men spin the waning hours of the legislative session:

Spitzer: "This is a session that had enormous potential but has ended with … significant disappointment. This session did not fail for a lack of leadership or energy or determination in the executive branch of government, but rather because the state Senate would not embrace the agenda to energize government and the economy."

Bruno: "Campaign finance reform is an obsession for some reason that I'm still trying to understand other than it's intended by its content to make New York State a one-party state. I think it's sad for the people of this state … that the governor establishes a position that nothing happens unless we get an agreement on campaign finance reform. … I don't know about you, in your lives when you get up in the morning, do your children, your significant others ask you, ‘What's the status of campaign finance reform?'"

There were indications that Spitzer would be able to get an agreement to create a commission to study congestion pricing, but nothing materialized, which means the city will probably not qualify for $500 million in aid that the federal Department of Transportation implicitly promised to the city if congestion pricing were passed by summer. Assembly Leader Sheldon Silver, who has been critical of congestion pricing, said the mayor was trying to bypass everyone else, "The mayor, without going to the City Council, insists that he is the city."

One bill that did pass was a revision of the 421-a tax break. The bill expanded the areas where builders must offer 20% of its apartments as affordable housing in order to get a tax break, but it turns out that the Atlantic Yards project is getting a deal and we think it goes something like this: The entire complex's housing stock will be taken into consideration, versus looking at it on a building by building basis, so some buildings won't have affordable housing in them, and the average affordable income number will be raised, offering the units to "higher-income" families who need affordable housing. The Daily News' Juan Gonzalez has a withering column about it.