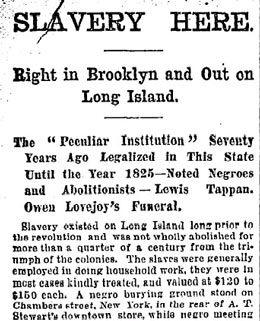 Yesterday, Mayor Bloomberg announced a project to commemorate abolitionist activity that occurred in Brooklyn in the 1800s. He named a panel made up of community leaders, academics, and historians to aid the city and Downtown Brooklyn Partnership in asking for and reviewing commemoration proposals.

The Post reports that the city has faced criticism in the past for not respecting Brooklyn homes believed to be a part of the Underground Railroad. The Mayor's press release reads:

In connection with the City’s efforts to implement the Downtown Brooklyn Plan – an initiative to stimulate economic growth, create jobs and improve local business conditions and quality of life for residents and employees in the area – an extensive research effort was completed in response to suggestions that certain houses on Duffield and Gold Streets in Downtown Brooklyn played a role in the Underground Railroad. The research did not directly connect Underground Railroad activity to the houses, but it did confirm a great deal of abolitionist activity in the area. As a result, the City is seeking to develop a commemoration program that will celebrate and embrace the role that Brooklyn played in bringing an end to slavery.

City Council member Letitia James said, "I am grateful to the Administration for recognizing the need to memorialize the rich history of Downtown Brooklyn. “The past is a prologue to our future, and all Americans need to understand and learn about the abolitionist movement in Brooklyn, and the role that slavery played in the development of this country and state."

The request-for-proposal is expected to be issued this fall. The Brooklyn Public Library has an extensive interactive feature on its website about Brooklyn and the Civil War. The New York Historical Society has an exhibit about New York's role in slavery called New York Divided (see our video). And NY State has been working on its apology for slavery.

Image of an 1891 article from the Brooklyn Daily Eagle