The homelessness rate in New York City reached a new record this month. On Wednesday, September 28th, 59,948 adults and children slept in city shelters. The official count is expected to hit 60,000 in a matter of days, up from 51,470 in January 2014, when Mayor de Blasio took office. And that's excluding specialized services for veterans, and drop-in centers like the one recently pitched for Bedford Avenue in Bed-Stuy—taking these beds into account, the advocacy group Coalition for the Homeless tacked the count at 60,456 back in July.

Then there's the slippery street-homeless count. The city estimates north of 2,500 individuals, while Coalition for the Homeless maintains that "there is no reliable measurement."

Department of Homeless Services Commissioner Steven Banks did his best on Thursday to put a positive spin on New York City's homelessness crisis, making the case that, if not for Mayor de Blasio's homelessness prevention policies, the situation would be even more dire.

"This is the high point," Banks told reporters. "But it's the lower point than what we were projecting."

"7,000 FEWER NEW YORKERS IN SHELTER THAN PROJECTED," blares a press release from DHS, which goes on to detail the measures this administration has taken to combat what New York City renters are up against: a housing crisis, stagnant wages, and the void left behind when Governor Andrew Cuomo and former mayor Michael Bloomberg eliminated the Advantage rental assistance program in 2011 (according to the city, the homelessness count spiked more than 5,000 per year between 2011 and 2014).

For one, Mayor de Blasio has pledged to phase out cluster site housing—a Bloomberg legacy that resulted in homeless families being placed in sordid apartments at high cost to the city—by the end of 2018. His administration has also allocated $1 billion for preventative services like emergency rental assistance, free legal help for tenants facing eviction, and a rental voucher to replace Advantage.

But cluster sites still have a significant footprint in NYC. According to the city, they currently house 11,400 adults and children. In an effort to cut back, DHS argued this week, the city has had no choice but to implement a "stop-gap"—rent out commercial hotel rooms as temporary shelter. Hotel shelters, not unlike cluster sites, have a reputation for inadequate services and poor security. After a triple stabbing murder at a hotel shelter on Staten Island last winter, Mayor de Blasio pledged to phase them out.

"We intend to use hotels less and less, and, as quickly as possible, stop using them," he said at the time. "However, we may have to use them going forward when there is a need." 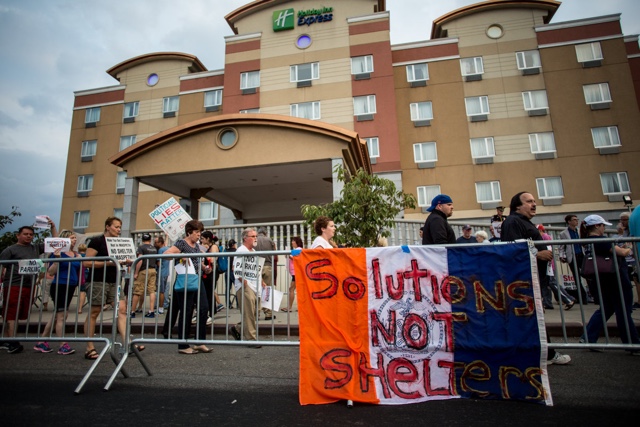 The de Blasio administration has also faced opposition as it attempts to open brand new shelters across the city. In Maspeth, Queens, residents have accused DHS of mismanaging a crisis, diminishing their quality of life and endangering their families in the process. DHS has countered that it needs the capacity, and that neighborhood shelters have the benefit of keeping homeless families close to their last known addresses.

"The City is opening new shelters across the City to ensure that families and individuals can maintain the community connections that will help them leave shelter as soon as possible," Commissioner Banks said in a statement this week.

But advocates say that the de Blasio and Cuomo administrations need to do more on the affordable housing front if the city hopes to see any marked dip in the homelessness count. Despite laws prohibiting landlord discrimination against rental voucher holders, for example, that practice is still rampant.

And while Governor Cuomo and Mayor de Blasio agreed late last year to build 35,000 units of supportive housing over the next 15 years—doubling the current amount—only $150 million in starter funding of the governor's $2 billion commitment had been lined up by the end of this year's legislative session. (A spokeswoman for the Governor's office stressed that the ball is in the legislature's court. Nonetheless, NYC advocates awaiting returns on promised state funding—sound familiar?)

"The response must match the scale of need," said Coalition for the Homeless Policy Director Giselle Routhier in a statement. "Albany needs to immediately finalize and implement its $2 billion housing plan, and the City must use a greater share of public housing and HPD resources for homeless households."

The advocacy group Picture the Homeless conducted a count of vacant properties in 20 NYC neighborhoods in 2011, and estimated that the buildings they found could house 199,981 people. While the city doesn't currently maintain a registry of vacant city properties, a collection of bills known as the Housing, Not Warehousing Act was discussed in a public hearing earlier this month. The next step, advocates say, could be passing those properties to nonprofit developers committed to building housing that low-income New Yorkers can afford.

A report last fall from the Independent Budget Office estimated the price tag for shelter services for 2015 at $976 million, up from $604 million in 2007—a 62% increase.

"There's no magic bullet here," John Krinsky, a professor of political science at City College, told us earlier this year. "But with some of the money we spend on homeless shelters, if we use that to subsidize some housing that would be permanently affordable, that could not be speculated on but would remain a permanent part of NYC's affordable housing stock, that would be money much better spent."

[Update 5:00]: The Department of Housing Preservation and Development issued the following statement in regards to the potential of NYC's vacant buildings:

Properties can be vacant for a myriad of reasons and our thorough analysis and investigation is required to determine which vacant or underused properties can be feasibly put to a better use. We will continue to work toward building a more affordable New York City remain open to examining all opportunities to help us do so.

#dhs
#homelessness crisis
#record high
#steve banks
Do you know the scoop? Comment below or Send us a Tip