Dozens of homeless New Yorkers and advocates rallied on the steps of city hall this afternoon to single out and condemn the NY Post's recurring portrayal of the homeless as dehumanized, quality-of-life case studies, as well as the Sergeants Benevolent Association's recent public solicitation of photographs of homeless people engaging in "quality-of-life offenses of every type."

"We're here today because we're disgusted by the treatment of homeless people in our city," said Alyssa Aguilera, the Political Director for Vocal New York. "We're tired of the criminalization and stigmatization of homeless people who are struggling, and need housing, and who need social services. Instead they are being targeted by the police."

According to the SBA, civilian documentation of the homeless is a valid response to those who exercise their right to surveil the NYPD. From their press release: "We, the 'Good Guys,' are sworn to protect our citizens. Shouldn't our public officials be held to the same standard?" Granted, this argument assumes that all homeless people are criminals "lying in our streets... engaging in open-air drug activity, and quality-of-life offenses of every type."

"This is some bullshit," said Jose Lopez of Make The Road New York. "If we're talking about solutions for our city, the solution cannot be to take a photo of a homeless New Yorker, who might just be on the street because he got pushed out by his slum landlord who refused to make repairs and decided to raise the rent."

"We need to name the problem, and the problem is our system," echoed Jesus Gonzalez of Churches United for Fair Housing. "We live in a for-profit system where some people are going to be able to afford housing, and most won't. Shame on the system! Shame!"

Earlier this month, the NYTimes reported that there are 56,284 New Yorkers in the city's shelter system. The number of street-homeless is more difficult to track, but the Department of Homeless Services cited about 3,000 this February.

"What I've been really upset about with the recent press, is there's been this false definition of the problem," said Christy Parque, the Executive Director of Homeless Services United. "First of all, the street-homeless are only about 5% of the population. We forget that the vast majority are children. The problem is not defined correctly, and it's perpetuating stereotypes."

For many in attendance today, the shelter system has proven to perpetuate homelessness. Danielle Stelluto, 27, a single mother of two, has lived in the Jackson Avenue Family Residence, a homeless shelter in the Bronx, for almost four years. "My experience with the shelter has been a revolving door," she said. "I get almost no help from the workers. I'm studying Digital Music Engineering at Hostos Community College, I work, I'm an advocate, and I'm still not getting out of the shelter."

Meanwhile, the conditions at Jackson are uncomfortable. "I've dealt with infestation, and there's mold," she said. "I am on the third floor in a room the size of half a studio, and we're not allowed to have air conditioners, so in the summertime it feels like over 100 degrees in my unit. I can't even sit in there with my kids." 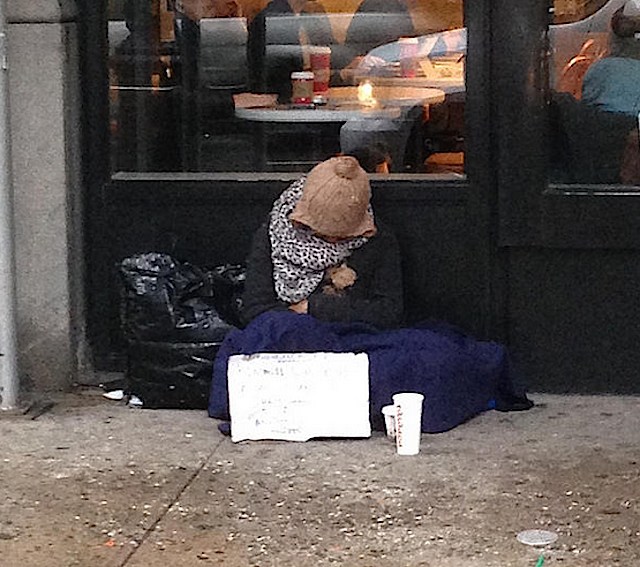 The city's notorious network of three-quarter housing—state-funded apartments instated under Bloomberg—is also problematic, characterized by high turnover and dismal living conditions. "Three-quarter housing is not a stable solution for most people," said Parque. "Because the vast majority of three-quarter houses are not safe. The homeless are very vulnerable to being taken advantage of by the house managers, or the landlords. They are susceptible to financial criminal abuse."

According to an April report from homeless advocacy group Homes for Every New Yorker, the homeless shelter population rose to a record 60,000 in 2014. The report urges Mayor de Blasio and Governor Cuomo to renew a city-state agreement that would create and fully fund 30,000 permanent supportive housing units—permanent housing for the homeless and recently incarcerated supplemented with health and psychiatric services—over the next decade.

"Permanent supportive housing is a solution for the chronically homeless," said Laura Mascuch, Executive Director of Supportive Housing Network of New York. "There are individuals who don't leave the shelter system or the streets because they have substance abuse issues, mental health issues, HIV/AIDS, and physical disabilities. If we don't build any more supportive housing, our census is just going to go up and up."

According to Mascuch, the average homeless New Yorker costs the state $58,000 per year, between prison, psychiatric care, and shelter fees. Meanwhile, a homeless New Yorker in supportive housing costs between $15-20,000. Mascuch added that the mayor has been generally supportive of adding more permanent housing, to the tune of about 12,000 units in New York City. However, "The governor needs to come to the table with a better figure. He suggested 5,000 units, which is only 3,900 for the city."

Ryan Gibbs, 45, of Picture The Homeless, spent five months in a shelter in 2006. "Usually when you get there you're supposed to get a case worker. I didn't get a case worker for the entire five months. It was like I was stuck in a loop," he said. "I figured it was better for me to stay in the streets then to be in there, where nothing was happening."

The Sergeants Benevolent Association did not respond to multiple requests for comment.

#homeless
#homelessness
#housing crisis
#shelter system
#tabloids
Do you know the scoop? Comment below or Send us a Tip