Not only are there more homeless New Yorkers today than compared to six years ago, but they’re staying in shelters an average three to four months longer than they used to, despite programs launched by Mayor Bill de Blasio to move them into permanent housing.

In January of 2013, when Mayor Mike Bloomberg was finishing his third term in office, shelter residents weren’t getting much help from the city in finding housing--they essentially left the system only if they saved up enough money for an apartment or found someone to take them in.

When he came into office in 2014, Mayor de Blasio promised major changes to lower the city’s homeless population and help New Yorkers find permanent housing. He’s since increased the budget for homeless services from $1 billion to over $2 billion, and created a new rental subsidy that helps people find an apartment and pay just a portion of the rent (up to 30 percent of their income) and have the rest covered by the city for five years.

But as of this January all three populations the city tracks — single adults, adult families and families with children — were staying in shelters longer than under Bloomberg. Single adults now stay an average of 14 months — four months longer than in 2013, and the longest in city history, according to data provided by the de Blasio administration. Adult families and families with children are spending 19 and 15 months on average — three months more than in 2013, and also longer than ever before with the exception of last summer. (The number of families in the shelter system usually rises when children get out of school.)

As of this past Sunday, there are 60,210 New Yorkers living in the shelter system, 21,892 of them children. According to the most recent city survey, there are an additional 3,675 people living on the street.

“Insane, insane that the wait should be longer,” said Christine Quinn, a former City Council Speaker who currently runs Win, the largest shelter provider in the city for homeless families. “The housing subsidy we have is in functionality the equivalent of no subsidy at all.”

Quinn has argued that $1,557 — the maximum monthly rent eligible for the program for a family of four — is not sufficient in a city where the median asking rent was $2,650 last year and where landlords have resisted accepting the subsidy.

A spokesman for the Department of Homeless Services, Isaac McGinn, said the city’s programs are working, and that they’ve helped more than 104,000 New Yorkers to leave shelters or avoid eviction. McGinn said because rents are outpacing wages, it’s “harder for families across the spectrum to find housing.” 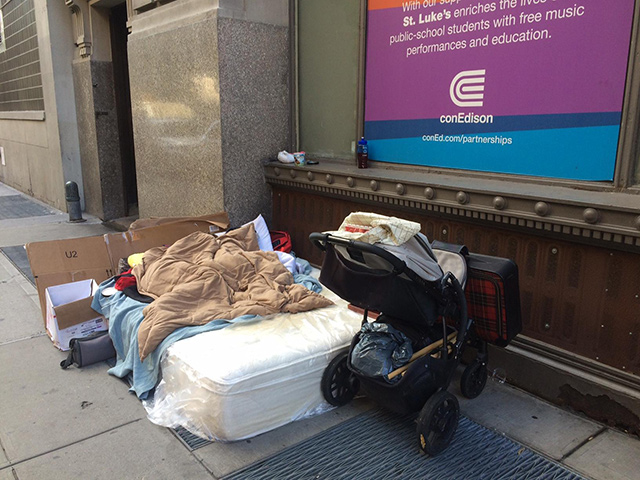 In the past, the state and the city created supportive housing together under the so-called New York/New York agreements. Now, the two are going about it separately. Governor Andrew Cuomo and Mayor de Blasio have committed to building 20,000 and 15,000, new units of supportive housing over a period of 15 years, they aren’t being built fast enough. Last year, the city made fewer placements in supportive housing than at any time in the past fourteen years.

“People are staying longer because it's still becoming more challenging to find housing,” said Giselle Routhier, policy director at the Coalition for the Homeless.

Elizabeth Brown, supervising analyst at the city’s Independent Budget Office, said the increase in shelter stays has a fiscal consequences: It costs $67,000 a year to house a homeless family in a shelter -- significantly more than it would cost to subsidize their rent.

#homeless
#homeless shelter
#mayor bill de blasio
Do you know the scoop? Comment below or Send us a Tip
A new Gothamist is coming! We’ve moved comments over to our beta site. Click here to join the conversation and get a preview of our new website.