The Department of Homeland Security today unveiled extreme immigration enforcement guidelines that direct interior and border enforcement officials on how to carry out President Donald Trump's policies. The published memos differ little from a pair of memos leaked over the weekend, and are already being met with resistance.

"These memos confirm that the Trump administration is willing to trample on due process, human decency, [and] the well-being of communities... in pursuit of a hyper-aggressive mass deportation policy," said American Civil Liberties Union Immigrants' Rights Project director Omar Jadwat in a statement.

"The courts and public will not allow this un-American dream to become a reality," he added.

The guidelines vastly expand deportation priorities, superseding efforts under President Barack Obama to focus enforcement on convicted felons and individuals on terrorism watch lists. Though President Trump said on the campaign trial that he would focus on removing "criminals" from the country, the definition of criminal has been broadly expanded to include any person who is in the United States without a visa. There are an estimated 11 million undocumented immigrants in the US.

"Under this executive order, with extremely limited exceptions, DHS will not exempt classes or categories of removal aliens from potential enforcement," a fact sheet published Tuesday morning states. "All of those in violation of the immigration laws may be subject to enforcement proceedings, up to and including removal from the United States."

The legal term "alien" includes undocumented residents—there are an estimated 500,000 in NYC—as well as anyone with a green card or temporary visa. Last week, immigration defense attorneys in NYC told Gothamist that they were already experiencing this hardline attitude in court.

A recent American Immigration Council report outlines the history of expedited removal, which has been on the rise in recent years. In FY 2013, 193,000 removals, or 44 percent of the total, were executed this way. Under Trump, the organization predicts, thousands more could be quickly deported, without due process. 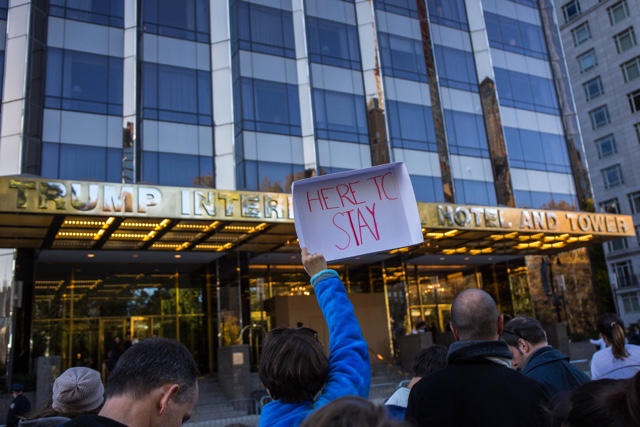 The border control memo can be viewed in full here, along with a fact sheet. Same for the interior control memo.

"I think the expanded use of forms of removal that don't permit a person the due process protection of going before a neutral judge is a very significant thing," NYCLU Staff Attorney Jordan Wells told Gothamist. "We are talking about the right to be here [in the US] and be among your family, and not be deported from the country. But it also is very ominous in terms of the regard this administration is going to have for people to have their day in court."

The memos also call for the prosecution of parents found to have aided a child's border crossing, and the reinstatement of a program called Secure Communities, which emboldens police departments to perform ICE duties. DHS refers to the police-collaboration program—a President George W. Bush legacy that would not apply under New York City's sanctuary guidelines—as a "highly successful force multiplier."

Another surprise, for immigration advocates, is a plan to send all immigrants apprehended at the border back to Mexico to await deportation hearings—not just Mexican immigrants, but anyone crossing the southern border.

An anonymous DHS official told the NY Times this morning that that particular guideline would not be implemented without approval from the Mexican government.

DHS has not eliminated Deferred Action for Childhood Arrivals (DACA). Trump pledged on the campaign trail to immediately repeal the policy, which has given temporary work permits to hundreds of thousands of immigrants who entered the US illegally as children.

All told, this vast expansion of DHS—including a wider application of expedited removal—would likely require an influx of Congress-approved funding. Most people detained by ICE are entitled to a hearing before a judge, and New York City has a strong track record for providing immigrants with representation in court. A Legal Aid Society attorney told us last week that she was adamant about continuing to pursue "every right our clients have."

But Wells cautioned that some aspects of the memos are more ideological than logistical, and could have an immediate impact on immigrant communities across the country. He referenced Brandon Judd, president of the National Border Patrol Council, who told the Washington Post this weekend that the draft memos were "heading in the right direction" by instilling fear in immigrants, and dissuading them from attempting to cross the border.

"You get the impression that agents are chomping at the bit to take Trump up on his invitation to just, without any sort of mercy or regard for why people are coming to the US, detain and deport them," Wells said. "All of the signals from the White House are to be relentless and to not prioritize."

While NYC laws limit cooperation between ICE and law enforcement, ICE still has the bandwidth to investigate cases and make arrests here. The Mayor's Office did not immediately respond to a request for comment.

Advocates across NYC have decried DHS's new mandate. "Immigrant communities and our allies will resist these policies," said Javier Valdés, co-director of Make the Road New York. "We are here to stay."

[Update 5:00 pm]: Mayor de Blasio reiterated New York City's sanctuary policy in a statement Tuesday. “We have been clear from the start that we will work with federal immigration authorities to remove individuals who are proven public safety threats in our City," he said. "What we will not do is turn our NYPD officers into immigration agents—or our jails into holding pens for deportation policy that will only undermine the inclusiveness that has helped make New York City the safest big city in the nation.”

#cbp
#dhs
#donald trump
#executive orders
#ICE
#immigration
#Memos
#original
Do you know the scoop? Comment below or Send us a Tip