11:27PM: We're enjoying the postgame coverage of the Giants' victory, with sad Tom Brady, really excited Michael Strahan (singing Eli's praises), Peyton Manning being thrilled with his brother's success (aw!) and thoughts from the 1972 Dolpins, secure with their undefeated record for another year (but the Patriots still won more games in a row!). While we've been inside, there are a number of large crowds celebrating the Giants' win all over the city - the police have been called to break some of them up!

We'll be talking about the Giants' incredible win for a while. Until tomorrow - at least you'll be sleeping well! 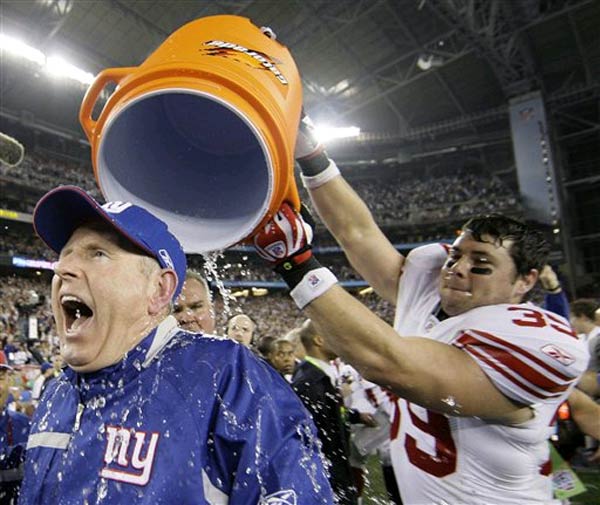 Photograph of Tom Coughlin getting Gatoraded by Madison Hedgecock by David J. Philip/AP

10:33PM: The Vince Lombardi trophy was presented to Giants owners, including Steve Tisch, who said the fans who have loyally followed the Giants all these years deserved it. Tom Coughlin kissed the trophy and Eli Manning was named the MVP. Michael Strahan spoke - guess he's even happier he came back now! And again, do you think Tiki Barber is kicking himself now? 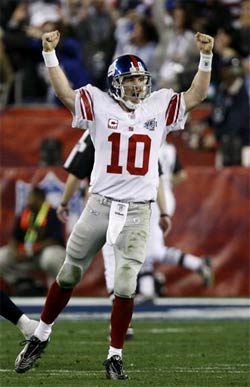 10:05PM: The Giants win the Super Bowl! Final score, Giants 17, Patriots 14. The underdogs win! Take that Boston! Is this the first time quarterback brothers have won the Super Bowl? But really, the Giants' defense was amazing.

The city's ticker tape parade is on Tuesday at 10AM, starting at the U.S. Custom House (at One Bowling Green) and will head up Broadway to City Hall. And that's primary day! Super Tuesday for the Super Bowl-winning Giants!

10:03PM: Patriots unable to complete the drive! With one second left, the field is flooded with people, though Manning and the offense are trying to move people off! Belichick has already gone over to hug Giants coach Tom Coughlin!

9:56PM: HOLY! Manning throws a touchdown to Plaxico Burress! Giants 17, Patriots 14. Just 35 seconds left - can the Giants hold on, or will the Patriots make a field goal? New England does have three time outs left (Giants have none).

9:52PM: Whoa. Manning, under intense pressure, manages to throw a 32-yard pass to Tyree, who is being challenged himself and manages to catch the ball and hold it to his helmet and keep it.

9:34PM: There's 3:12 minutes to go in the game, and the Patriots seems to have found their offensive rhythm. Patriots are at first and goal, Giants fans are anxious. 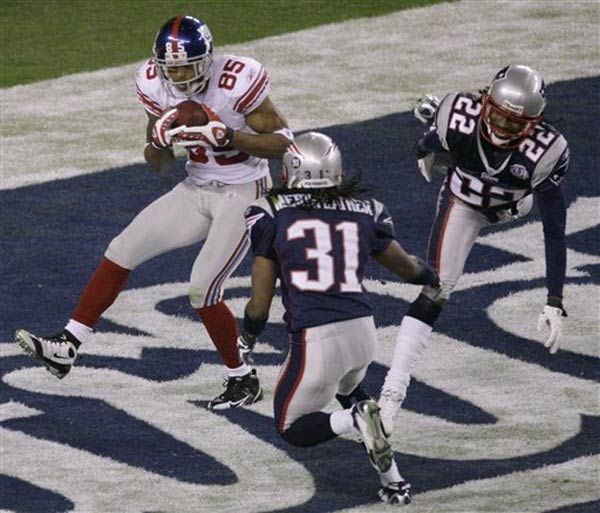 Photograph of David Tyree catching a touchdown by Charlie Riedel/AP

9:11PM: In a six-play, 80-yard drive, the Giants get a touchdown (Manning made the 5-yard touchdown pass to David Tyree)! It's the first points in the game since the beginning of the second quarter, when the Pats made their touchdown. Giants 10, Patriots 7!

9:05PM: New England punts the ball, it's the fourth quarter. The NFL Super Ad with the Houston Texans' Chester Pitts and Ephraim Salaam is pretty cute. But that Coke ad, with the Thanksgiving Day balloons of Stewie, Underdog and Charlie Brown is more adorable (you can see it here, at My Coke Rewards - it's commerical #1)!

8:57PM: New England has possession, commentators dwell on the humidity of the stadium. Apparently bananas have been brought to the sidelines so players have more potassium!

8:53PM: Manning attempts a pass to the endzone but it's incomplete (he shoulda just thrown it into the middle). The Giants' drive only ends up being 10 yards. 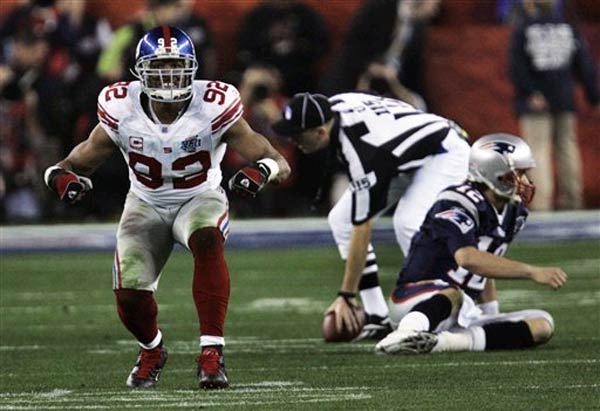 8:42PM: Strahan sacks Brady! So, fourth and 13, at the 31 yard line, Brady makes an incomplete pass into the endzone. And we get the WALL E commercial!

8:30PM: Second half, Patriots' drive stopped after 26 yards. Vitaminwater (of Queens!) commercial with Shaquille O'Neal as a jockey - and we laugh because physical comedy is funny. Oh, wait, the Giants had 12 men on the field, so New England gets the ball again at the Giants' 39 yard line. 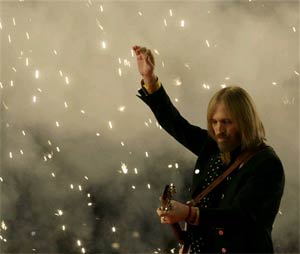 8:04PM: Tom Petty and the Heartbreakers open their halftime show with "American Girl." Petty has always looked sorta dead, but now he looks like a corpse who has grown a beard. We wonder if the crowd on the field is drawn from all of Arizona's party schools. After "I Won't Back Down," they play "Free Fallin'" which is sort of mellow for this game (crowd is holding LED faux-lighters!) but it's a big hit. The final song is "Runnin' Down a Dream." Good performance, but we wonder if the NFL will ever allow a woman to perform the halftime show again.

7:51PM: Tom Brady is sacked and fumbles the ball. The Giants have possession, with 10 seconds left. Manning's end up trying to throw a Hail Mary in the closing seconds of the first half, but no luck. Time for Animal Planet's Puppy Bowl! Surprising it's such a low-scoring game so far.

7:36PM: You can't slap the ball! Manning is sacked, loses the ball, mad scramble ensues and Ahmad Bradshaw slaps it, which means a 10-yard penalty. Giants end up punting with less than 2 minutes to go in the second quarter. 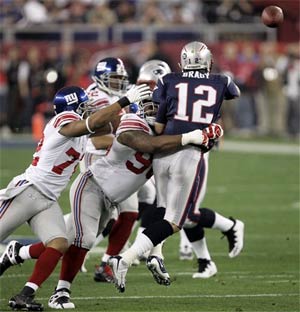 7:30PM: The Giants have possession after sacking Tom Brady - twice!

7:22PM: It looked like Manning bobbled the exchange to Ahmad Bradshaw, so Patriots Pierre Woods fell on top of it. The Giants managed to keep possession before punting the ball. And then we get Naomi Campbell's SoBe Lifewater commercial (dare we say the Thriller routine was inspired by the Filipino prison version?).

7:13PM: Manning's pass bobbles and the Patriots' Elllis Hobbs intercepts it! And after such a nice pass to Amani Toomer. It's Manning's first interception since Ellis Hobbs caught one in the Giants-Patriots' December 30 game.

7:07PM: First shots of Tom Brady's girlfriend Gisele Bundchen. Then cutaways to Jim Carrey and Jenny McCarthy (it looks like Noah Emmerich is on the left) and then one to Pamela Anderson.

7:02PM: Patriots had first and goal (Tom Brady had thrown a pass to receiver Benjamin Watson, but Antonio Pierce interfered) in the waning moments of the first quarter. In the second quarters, at second and goal, the Patriots get a touchdown. Patriots 7, Giants 3.

6:53PM: Heh, from Bostonist, which is also liveblogging: "Brady throws one into the ground. Joe Buck tells us we can rewatch all the Super Bowl commercials on Myspace. This is officially the worst minute of the week."

But the Diet Pepsi Max commercial, "Nod," is funny - but they shoulda gotten Will Ferrell! Via Spike, here's the commercial.

6:45pm: During a scoring drive, Eli Manning passes to Plaxico Burress in the end zone, but it gets knocked down. The Giants ultimately settle for a field goal - Giants 3, Patriots 0. 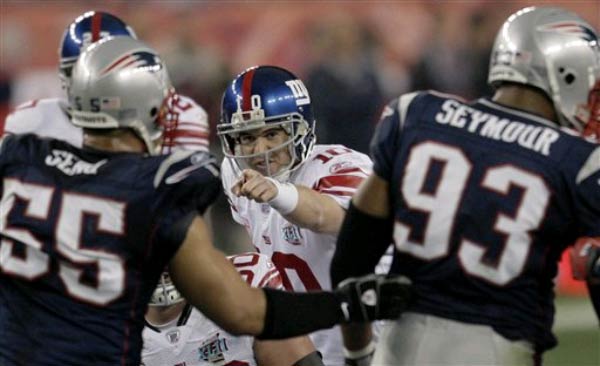 6:39PM: Camera shows Peyton Manning in luxury box. Giants get a third first down - camera shows a huge section of Giants fans in blue jerseys. Which brings us to a slight pet peeve. The Giants are called "Big Blue," yet they are wearing white jerseys with red numbers and lettering (and have worn red jerseys!). Which is probably because (like other NFL teams) they want to sell more kinds of jerseys to fans.

6:35PM: Two Patriots players down! This after the Giants make their second first down. Some thoughts: The crowd is really loud and New England Patriots coach Bill Belichick is wearing a red hoody, not his usual grim-seeming grey hoody. 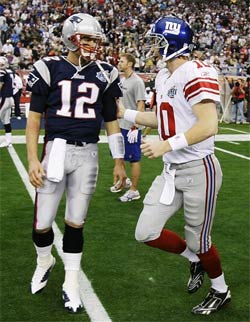 6:24PM: The Miami Dolphins' Jason Taylor receives the Walter Payton Man of the Year Award, which is awarded for a player's "community service activities as well as his excellence on the field." The award is presented by NFL Commissioner Roger Goodell and the late Chicago Bears' running back's wife.

6:18PM: Jordin Sparks, last season's American Idol winner and daughter of former Giant Phillipi Sparks, comes out to sing the National Anthem. The players seem to sway during the singing, and she does a good job with it.

6:15PM: The Fox introductions are full of purple prose. The word that describes the Giants' run? "Resiliency." After a Giants montage, against Kanye West's Stronger (with assist from Daft Punk), the Giants run out to the cheers. The Patriots' season is summed up by "teamwork" and after their montage, the Patriots run out onto the field to Ozzy Osbourne's Crazy Train.

Photograph of Tom Brady and Eli Manning meeting on the field before the game by David J. Phillip/AP

6:10PM: The Super Bowl is getting started. We tried to avoid the pre-game, because Ryan Seacrest makes us...well, upset (we don't care if he and Anderson Cooper text each other!). Alicia Keys performed a medley of songs and there was a recitation of the Declaration of Independence by actors in 1776-period gear and current and former football players and coaches.