The symbol of evil dangled sedately over a train track on a drizzly day in late March before being lowered by a construction crane, its steel wheels resting on steel rails with barely a sound. Workers in hard hats moved forward to unwrap a tarp from the German-made Model 2 freight car, exposing its brown weathered flanks to the gathered — mostly journalists and officials of the Museum of Jewish Heritage.

To the side and watching closely were Ray and Leon Kaner, a married couple in their 90s whose contribution to the occasion would be to discuss how thousands of train cars like this one had coursed across Europe down tracks like that one during World War II, carrying innocents such as themselves toward death and enslavement in extermination camps.

"This is what I went through as a child," Ms. Kaner said. "I am one of these people that traveled on this train."

Not this train car precisely, in all likelihood, but a train car like it. Ray Kaner was 11 when the war began in 1939. That same year, the Nazis expelled her from a ghetto in Lodz, Poland, and sent her to Auschwitz, where she says two of her brothers died.

"We were marched into these trains," she recalled. "Over 80 people. There were no windows. Just some pails for urination. We couldn't even lie down on the floor to sleep. We had to be in a sitting position."

Ms. Kaner's voice was unwavering but she tired at times while describing the arc of her Holocaust survival. She pressed on because that's what she had come to do as part of the museum's preparation for a major exhibit on Auschwitz, where 1.1 million people were killed, a million of them Jews. The exhibit opens to the public on Wednesday.

"I want people to know what hate can do to make people into murderers," she said.

Her husband’s alternative tack was to cram the immensity of the experience into a single, terse summation: "I'm lucky to survive, that's all I can say." 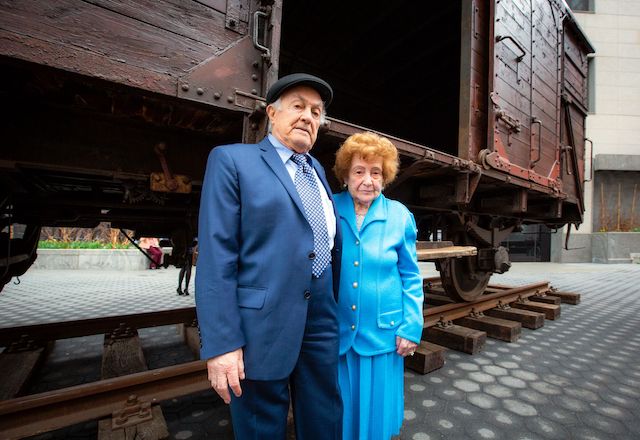 Eyewitnesses like the Kaners and their dwindling cohort have reached very old age. The near result is this: The world's encounter with the Holocaust will shift from personal testimonies to artifacts. The change has pre-occupied author Daniel Mendelsohn since researching The Lost, his 2006 memoir about searching for evidence of family members who died at the hands of the Nazis.

"In another ten years, none of these people will be around," he said of the survivors. And that poses a problem he's familiar with as a scholar of Classical literature. "You have a lost civilization with no living members and then it becomes complicated. It becomes about interpretation when you don't have the old lady to say, 'Yes, this happened this way,' or, 'No, it didn't happen that way.'"

It also raises difficult questions of sympathy, memory, and fact.

Mendelsohn, editor-at-large at The New York Review of Books, is wary of expecting too much of artifacts. When Gothamist / WNYC approached him for an interview on the exhibit, and the cattle car in particular, he said his first thought was, "'Oh no, not again.'" Years earlier, while preparing to write his book, he'd encountered a well-meaning museum in Europe that left him "torn" about the presentation of such explicit evidence. "I think it can be healthy to be confronted by the physical reality, but you always want to avoid the possibility that it becomes a kind of macabre entertainment," he said.

That exhibit allowed visitors to enter the cattle car, which gave him something like moral whiplash. "I thought, ‘Those people during the war got in cattle cars and then they came out and they went into a gas chamber. But you go to the cattle car today and you come out and you have the Asian chicken salad in the cafeteria.’"

Mendelsohn argues that there are limits to experientially re-creating what he describes as the "horror and profound moral collapse" of the Holocaust. "Anything that claims to replicate the experience of the victims, I think, is problematic. Or even to say, 'Oh you can have an idea of what it was like.' No you can't."

He was glad to learn that no one is allowed to step into the cattle car outside the Museum of Jewish Heritage, and that the artifact sits in a frame: a four-foot-high metal railing on all sides that keeps viewers at a critical distance. He said there should be a border around scenes of such suffering to mark them as "a kind of sacred space," allowing for a sympathetic experience while avoiding the feel of a theme park.

"I think a kind of healthy imagining is as far as you can go," he said, emphasizing that he thought the current exhibit had found the right side of that line. 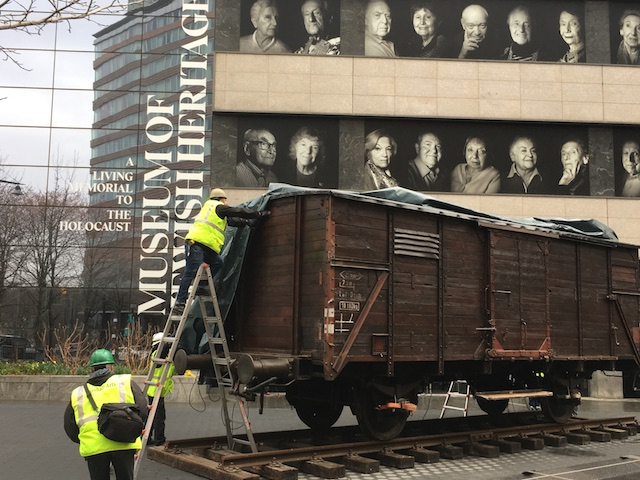 On the morning of the installation of the cattle car, museum president Jack Kliger said he and his staff had grappled with another concern: The artifact's setting in a public plaza and its potential to shock people going about their day.

"It is absolutely disturbing, we understand that," he said. "We've been in touch with the school across the street, with the parents, the principal, the teachers. And we will not allow any child under 11 to enter the exhibit. But we do think it's an important thing for families to discuss with their children, not for shock value but for them to know that something bad did happen, what the story is, and how there can be hope for the future."

Kliger stressed that the cattle car is placed in curatorial context with signs explaining its history and significance. He also admitted that vandalism was a concern so the museum has increased its round-the-clock security and added extra video surveillance to keep a close watch on the cattle car. Kliger also said he’s consulted with NYPD's anti-crime and anti-terrorism units. "They've made a pledge to keep it safe," he said. 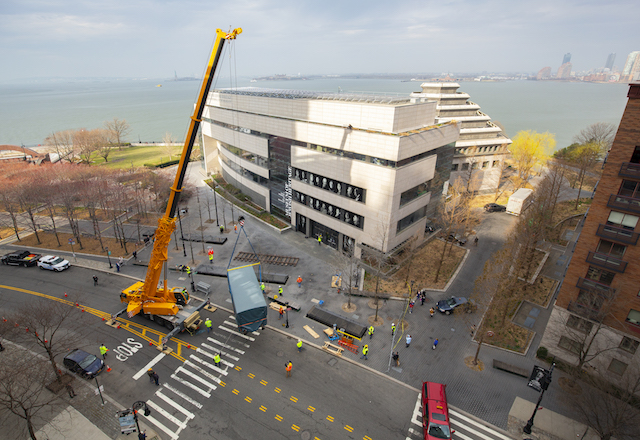 Jim O’Grady is a reporter for WNYC and a contributor to Gothamist. You can follow him on Twitter at @jimog.

#Holocaust
#Museum of Jewish Heritage
#original
Do you know the scoop? Comment below or Send us a Tip