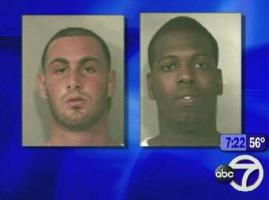 A 22-year-old Hofstra student was arrested for kidnapping and assaulting a Zeta Beta Tau brother before stranding him on a road. Adam Schelberg was allegedly upset because he thought the victim was dating his ex-girlfriend.

Schelberg asked the victim to take a ride in his car and drive him to a Hempstead street corner where four of Schelberg's friends were waiting. Nassau County Detective Raymond Cote said, "Four men approach the car, they open the doors and they get the victim out of the car. They get to beating him around the upper body and in the head with their fists." One of the attackers also had a gun.

Before the attack, Schelberg reportedly asked, "Are you messing around with my girl?" and the victim said, "No, it's not what you think. We're just friends." After forcing him back into the car, they made the victim strip to his underwear and dropped him off on Fairway Boulevard. A driver stopped and let the victim call a friend to take him to the hospital.

Besides Schelberg, his friend Danny Henderson was arrested for kidnapping and assault (they also face robbery and firearms charges). A lawyer for Schelberg, who made the $250,000 bond/$125,000 cash bail (Henderson is still being held), said, "There is much evidence that has yet to come out in this case." The police are still looking for the three other accomplices.