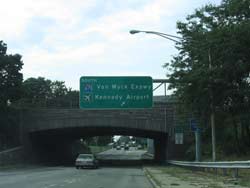 A family walking along the side of the road in Queens was struck by a car that witnesses claimed was doing 90 m.p.h. After plowing into the family, which included an infant, the driver continued on, perhaps neglecting to notice the baby that was hurled into the air and a the male friend of the mother who was killed.

Police were called to the scene of the family that was sundered along the Sunrise Highway. A 28-year-old father was struck dead by a hit-and-run driver. He was carrying his one-year-old son, who was sent flying before landing on pavement. Fortunately, the child only suffered minor injuries. The 22-year-old wife is hospitalized in stable condition, but not seriously injured, save for the fact that she is now a widow.

Police are searching for a black 2000 Nissan Maxima with the NYS registration plates DVH1449. Anyone aware of such a car or its homicidal driver are encouraged to call the police. The driver of the Nissan struck another car during the incident and is obviously a hazard.

#accident
#highway
#hit and run
#infant
#killed
#nissan
#reckless
#sunrise
Do you know the scoop? Comment below or Send us a Tip