Hit Men and Harassment at Hot97 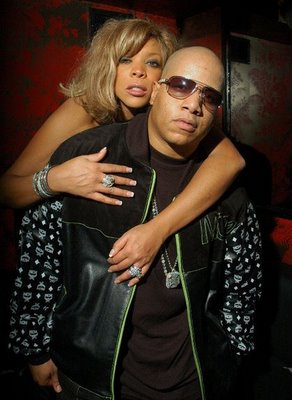 Who knew radio could be so dangerous? The Daily News reports that deejay Wendy Williams' husband (the two are pictured together) had plotted to kill one of Hot97's deejays, a rival who allegedly trashed his wife on the air.

According to the federal lawsuit charges filed yesterday, hubby Kevin Hunter sought out help from a WBLS studio employee in finding a hit man to "off" Hot97 personality Tarsha Jones. The allegations are part of a sexual harassment suit filed by Nicole Spence, 27, the talent booker for Williams' show.

In March, the NY Post reported on Spence's troubles at the station when she filed papers with the Equal Employment Opportunity Commission. The complaint included "that her boss' husband, Kevin Hunter, 33, demanded sex from her more than a dozen times and created a hostile work environment by repeatedly beating up Williams, 43, in and near the studio."

Two years ago, the NYPD installed a surveillance camera outside of Hot97's Hudson Street offices following a few shootings linked to the station. Maybe they need to install some inside, as well. That same year The New Yorker also wrote a lengthy piece on the Hot97 "Turf Wars".