Hit-and-Run Kills Man Getting Coffee for His Doorman 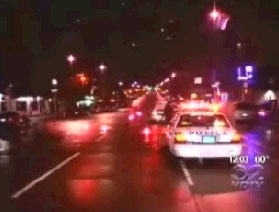 Around 2:30AM yesterday morning, 89-year-old Allan Stevenson was crossing First Avenue at East 73rd Street in Manhattan when a Mazda Miata fatally struck him. The car did not stop.

A veteran theater and film actor, Stevenson, who walked with a cane and lived at 399 East 72nd Street for 40 years, had a late night ritual around his neighborhood. According to the NY Times, he would have a "glass of red wine at Delizia, the restaurant around the corner. Next, he stopped by the S.A.S. deli to pick up a bagel with butter, a newspaper and a steaming cup of coffee with milk and two sugars." Stevenson's doorman Jim Quinn told WPIX, "He did this every Monday and Tuesday night for me. He'd go and get the coffee and bring it back for me."

Leonel Gomez, who works at Delizia, told the Daily News that the "light was flashing" when Stevenson was trying to cross and that the Miata was speeding at 80MPH, blowing through the red light, when it hit the elderly man. S.A.S Deli worker Pablo Catorce, who sold him the coffee, said, "I feel bad. I knew the guy for 17 years. He used to be my friend. We'd talk sports."

His sister, Ruth Steven Gladstone, though, was philosophical, "I feel very sad, but he lived almost 90 years and that's a long time. He had a nice life." Still, police are urging people with information about a red Mazda Miata with a damaged front to come forward (it was later seen turning right onto East 76th) and call CrimeStoppers (800-577-TIPS).