A multi-vehicle collision yesterday left four people seriously injured—and police say that the crash was instigated by a driver who fled the scene.

The crash took place yesterday at about 4:40 p.m., and it initially seemed that the chain reaction may have been started by a taxi cab that jumped the curb at Broadway and West 62nd Street. But the NYPD's preliminary investigation has revealed that the driver of a black, four-door, 1999 Honda Accord was speeding up Broadway when he or she rear-ended the yellow cab. The cab in turn struck a halal cart, which crashed into a Con Edison van.

A 39-year-old woman received a severe laceration to her left arm, police said—the Daily News reports that the halal cart fell on top of her, and nearly severed her arm. Witnesses at the scene reportedly helped lift the cart off of her.

"She looked really hurt," witness Laurie Adams told DNAinfo. "You could see her arm was broken. Her bones were sticking out."

The driver of the taxi, Michael Parvaz, told CBS New York that the hit-and-run driver hit him intentionally—and that in his eight years of driving a cab, he'd never before had an accident.

"He hit me like that! Bump! Bump! Bump, three times!" he said. "He hit one time then I put the brake, and he again hit me, then I lost control."

Police are looking for the driver of the Honda, and have identified the license plate as a Pennsylvania plate with the number KCN0713. The black vehicle was damaged to the front on the passenger side during the crash. 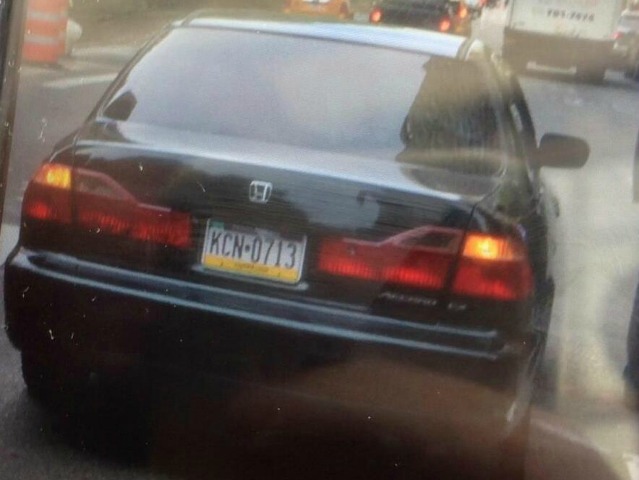 Police are asking anyone with information about the incident to call the NYPD's Crime Stoppers Hotline at 1-800-577-TIPS (8477) or for Spanish, 1-888-57-PISTA (74782). You can also submit tips by logging onto the Crime stoppers website at WWW.NYPDCRIMESTOPPERS.COM or by texting tips to 274637 (CRIMES) and entering TIP577.