Coming from another owner, an application to renovate 11 East 11th Street might have been dismissed without a second thought. But at last Thursday's Community Board 2 meeting, board members evaluating the proposal to alter the landmarked Greenwich Village property recognized bigger issues at play. The building currently houses a conservative synagogue, and the renovation is partly intended for religious purposes.

"Certain things trump New York City laws, and one of those things is the right to worship," Landmarks & Public Aesthetics Committee 1 co-chair Sean Sweeney warned. Sweeney was concerned that a denial might carry not only symbolic implications but consequences of a more material nature.

"I really don't want to see a court case come out of this."

After previous incarnations as a stable and a garage, the historic building has been home to The Conservative Synagogue of Fifth Avenue since 1961. Today, the "small, traditional, egalitarian" house of worship serves 90 families and welcomes people of all backgrounds.

The proposed addition seems minimal enough: 8 feet, 10 inches on the front with a revamped façade and a mansard roof. But for members of the synagogue, those 8 feet mean room for a mizrach, an east-facing wall that would allow them to worship toward Israel, the proper orientation according to Talmudic Law.

"Although it's not a requirement, it is certainly the preferred direction," said Valerie Campbell, a lawyer speaking on behalf of the synagogue at the meeting.

In addition to its religious function, the renovation creates enough space to bring the building up to ADA standards with wheelchair-accessible bathrooms on every floor. Former president Edward Kerson explained that adding accessible features in an interior-only renovation would be impossible "without seriously reducing the size of the sanctuary." Architect Jonathan Kammel's design "ensures that older members will have the facilities they require."

"That's more important than anything for me," he emphasized.

The plans also include modern fireproofing for the 1921 building. Kerson explained that a sensible approach to the renovation would send a message to potential donors that safety is a priority.

"When you're in it for the long haul, you want to attract money to the project that's smart money," Kerson explained. "We've used this building for 50 years, and we want to have confidence we'll use it for another 50."

A pedestrian passing the synagogue might never notice it; tucked between two larger brick buildings at the end of a long courtyard, the modest two-story structure doesn't call attention to itself. Board members and synagogue personnel agreed that the plain stucco façade isn't much to look at—Sweeney himself acknowledged that "this is not a building of significance." Still, the Greenwich Village Historic District property is protected by the same laws that preserve its more imposing Greek Revival and Federal-style neighbors. 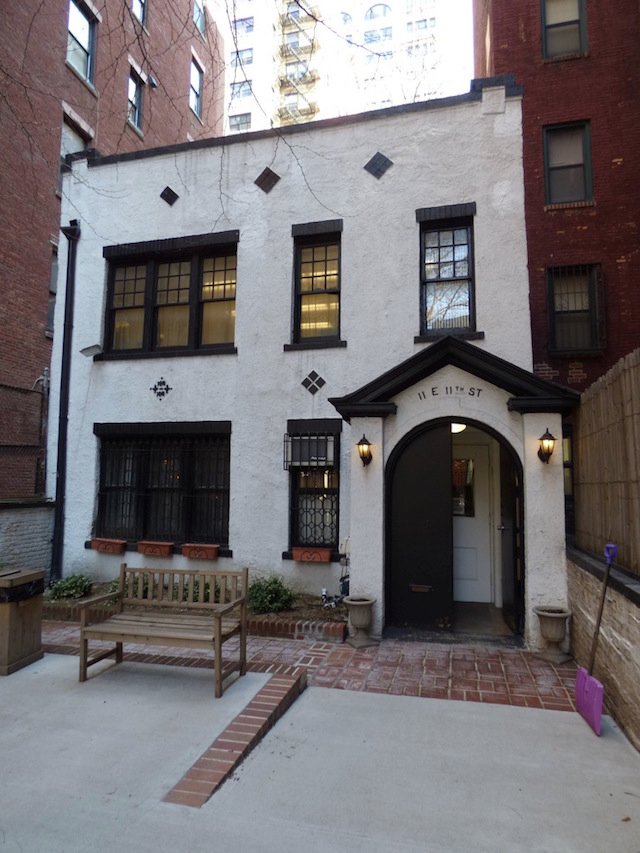 "We don't judge the aesthetic beauty of a property as a criterion for altering it," said Landmarks 2 committee member Chenault Spence.

Bo Riccobono, a Landmarks member who voted to deny the synagogue's application at the committee meeting earlier this month, argued that Greenwich Village is unique for its eclectic architecture and that every historic building should therefore be valued equally regardless of appearance. Riccobono seemed appalled by the synagogue's plans to replace the building's original façade.

"They're taking the front of the building and destroying it, and then they'll Disney World it and try to make it what it was," said Riccobono, concluding, "As a landmarks committee we can't allow that."

Others noted that the renovation would stay as true to the original structure as possible. Even if it were preserved, the façade's stucco facing has already been periodically replaced out of necessity. Kammel's design incorporates the same leaded glass, wooden windows, and decorative tiling that make the current edifice distinctive.

"The proposal is basically designed to keep the charm and everything that's special about it the same," said one board member.

While some board members felt that denying the application veered uncomfortably close to impinging on the congregation's right to worship, others worried about the implications of approving it. However true to the original, the mirror-image reconstruction technically amounts to the demolition of a façade, a significant alteration that the board has been cautious of approving in the past.

"We anguish over the backs of brownstones that show only to their neighbors and routinely deny any significant demolitions of the back of those buildings," said Chenault Spence. "In the interest of what others might come with later, I can't see how we can possibly approve this."

Approve or deny, the board only has so much power when it comes to protected buildings. Ultimately, it's up to the city's Landmarks Preservation Commission to greenlight alterations.

With 27 votes to deny trumping eight to approve and one abstention, CB2 denied the Conservative Synagogue's proposal on the grounds that its use-based justification should never have been brought before the Landmarks Committee in the first place. Board chair Tobi Bergman concluded that "it's not our department" and advised those speaking on the synagogue's behalf to seek an approval process more suitable to their hardship argument.

Going forward, Kerson assured Gothamist that the synagogue does not intend to alter Kammel's design. Representatives are scheduled to appear before the LPC at a public hearing today.

Although the issue of religious freedom featured prominently in the community board's decision, the synagogue's spokespeople didn't actually invoke or even refer to the right during their presentation. But Kerson later clarified that he isn't afraid to get constitutional if necessary.

"In my mind, this was Plato's Republic versus Tocqueville's America," he reflected. "There is such a thing in my America as the first amendment."

#community board 2
#greenwich village
#landmarks preservation commission
#religious freedom
#synagogue
#original
Do you know the scoop? Comment below or Send us a Tip
A new Gothamist is coming! We’ve moved comments over to our beta site. Click here to join the conversation and get a preview of our new website.