Historic Arch for Rent in Inwood 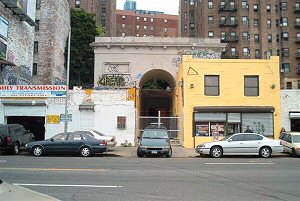 In the market for an arch? Who isn't. And now the historic Seaman-Drake arch at 5035 Broadway in Inwood is for rent. The Manhattan Times reports that the marble arch has been partially buried behind storefronts, but it was once the gateway to a hilltop estate owned by the well-to-do Seaman then Drake families in the 19th Century. The Inwood Journal provides some more history:

It used to guard the entrance to a long driveway which curled up to the Seaman, later Drake, estate perched atop the hill bounded by present-day 215th St on the South, 218th St on the North, between Park Terrace East and Park Terrace West. Outfitted with iron gates — parts of the hardware still exist — it has windows upstairs which suggest that the gatekeeper had quarters in the arch.

That would be a pretty sweet apartment, but it looks like the space is only available for commercial ventures. Two buildings were attached to the historic, yet unlandmarked arch in the 1950s, one of which just became vacant and would share the space. The realtor says there are currently "three possible new vendors - a club, a catering restaurant and a hair salon."

#arch
#drake
#estate
#inwood
#real estate
#rent
#Seaman
Do you know the scoop? Comment below or Send us a Tip