Hillary Wants Another Debate, Barack Says No Thanks 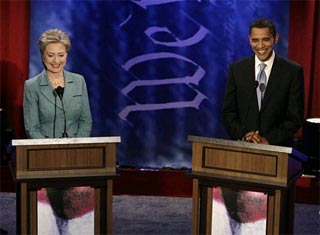 Hillary Clinton's campaign sent a letter to Barack Obama's campaign to suggest an unmoderated debate, but Obama's campaign said no, specifically pointing out, "We have participated in 21 nationally televised debates, the most in primary history, including four exclusively with Senator Clinton. Senator Clinton refused an earlier invitation that had been accepted to debate in North Carolina."

Instead, Obama's campaign said it believes "it's important to talk directly to the voters of Indiana and North Carolina about fixing our economy, cutting the cost of health care and ending a war in Iraq that never should have been authorized in the first place."

Originally, Obama had agreed to a North Carolina debate on April 19, but the Clinton campaign was "concerned" since it was the first day of Passover. Then Clinton agreed to an April 27 debate, but Obama did not, leading to the cancellation of the NC debate.

The letter from Clinton campaign manager Maggie Williams (addressed to Obama campaign manager David Plouffe) notes how the public has been interested in this primary race, refers to Obama's refusal of tomorrow night's debate and proposes a "Lincoln-Douglas" style debate:

Senator Clinton and Senator Obama will participate in a 90-minute debate in an open public forum. Just the two of them — no questioners, no panelists, no video clips. One candidate would speak for two minutes, then the other, alternating back and forth all the way through the debate. Their discussion — not any pre-set rules — would determine how long they spend on one subject before moving on to another. Such a debate would range across all of the challenges, large and small, we face as a nation or it could focus on the most significant issue we face today, — the economy.

We can readily agree on a host, a place, a date, and a broadcaster or series of broadcasters.

Both of our candidates are making history. Let us continue to do so. Let’s debate.

You can read the whole letter here.

Obama said in an interview with Fox News' Chris Wallace that he's "not ducking" a debate, emphasized how he wants to talk directly to "as many folks as possible on the ground, and "We’re not going to have debates between now and Indiana.”

#barack obama
#debate
#election 2008
#hillary clinton
#primary
Do you know the scoop? Comment below or Send us a Tip