Hillary Remains as a Major Figure in the Election Cycle 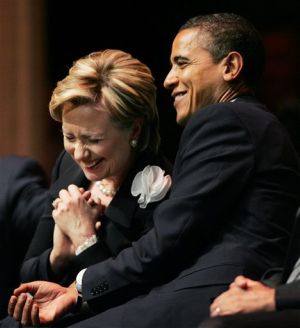 Hillary Clinton renewed her call for party unity behind Barack Obama during the Democrats weekly radio address yesterday. Clinton was asked to give the address following the Dems big week in Denver by Senate Majority Leader Harry Reid. She hit home stumping points for Barack about how his presidency along with a Democrat-controlled Congress would revitalize the economy and lead to more affordable college education. Clinton said that the gap between Democrats and Republicans "could not be wider."

Hillary's name is naturally being tossed around quite a bit since Friday's announcement of Sarah Palin as the second woman in history to be a major party's VP choice. The NY Times has two articles today about how women, particularly Hillary supporters, are reacting to the pick. The Week in Review talks to some of the most stung Clinton supporters. These include two women who teared up during Hillary's speech on Tuesday yet refused to even watch Barack's on Thursday (and instead turned to the uplifting movie The Squid and the Whale). Despite not seeing his speech, one Clinton supporter felt confident that Obama "is not good for women" and "doesn't have a message.

Maybe a picture could be worth more than a few thousand of Hillary's words in changing the minds of the most devoted within the "sisterhood of the traveling pantsuit." In the following video, Hillary shows that she is so committed to party unity that she'll even snub a kiss from her husband in order to embrace the Democratic candidate.

Maybe a kiss from Bubba counts as "more of the same."

#election 2008
#hillary clinton
#sarah palin
#video
#weekly radio address
Do you know the scoop? Comment below or Send us a Tip
A new Gothamist is coming! We’ve moved comments over to our beta site. Click here to join the conversation and get a preview of our new website.