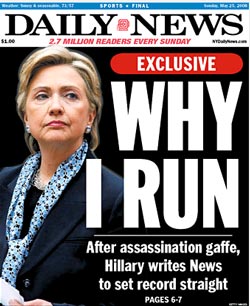 After her poorly received use of Robert Kennedy's 1968 assassination as why she is staying in the hunt, Hillary Clinton has written an editorial for the Daily News to apologize and re-assert why she's sticking it out.

She reiterates her apology, saying she was "making the simple point that given our history, the length of this year's primary contest is nothing unusual"--she has, at least twice, pointed out that her husband didn't clinch the 1992 nomination until June and that RFK was assassinated in June after the California primary.

However, some critics have argued this year's primaries have started much earlier than in years past, Bill Clinton was way ahead in 1992 by the time June rolled around, and wonder she didn't cite the long 1984 primary season, instead of recalling a tragedy. Still, a Daily News editorial from the paper says her remarks were simply "inartful": "The popular vote and delegate count margins are as narrow as they get. Clinton has every right, even a responsibility to her supporters, to continue to make the case that she would be the stronger general election candidate against John McCain."

Here's an excerpt of Clinton's editorial:

But I was deeply dismayed and disturbed that my comment would be construed in a way that flies in the face of everything I stand for - and everything I am fighting for in this election.

And today, I would like to more fully answer the question I was asked: Why do I continue to run, even in the face of calls from pundits and politicians for me to leave this race?

I am running because I still believe I can win on the merits. Because, with our economy in crisis, our nation at war, the stakes have never been higher - and the need for real leadership has never been greater - and I believe I can provide that leadership.

In a column today, the NY Times' Maureen Dowd declares "something caused Hillary’s inner Eve Harrington to leap out in South Dakota" and calls her remarks "tasteless." The Daily News' Michael Goodwin says Clinton is "her own worst enemy" and writes, "She's now so toxic she's probably doomed any hope of being named Obama's running mate. He didn't want her to start with; now he won't have to take her. And, for the Wall Street Journal, former Reagan speechwriter Peggy Noonan slams Clinton's excuse "that sexism did her in."

And though RFK Jr. thought that Clinton's remark mentioning his father's death was a mistake, other Kennedys are upset.

#barack obama
#election 2008
#hillary clinton
#primary
#rfk
Do you know the scoop? Comment below or Send us a Tip