Hillary Clinton turned 71 on Friday, and spent her birthday in conversation with Kara Swisher (of the tech podcast Recode Decode) and hundreds of admirers who gathered at the 92nd Street Y on Manhattan's Upper East Side. The packed hall buzzed with anticipation as the clock ticked toward Clinton's arrival—two years after a catastrophic defeat, the former Secretary of State can still sell out a show.

As the lights dimmed, a hearty voice boomed over the loudspeakers, commanding us all to put away our cameras and our recorders. Anyone with questions for Clinton could submit them via index cards roaming ushers distributed up and down the aisles. An aide presumably sifted through these backstage, presenting the culled herd to Swisher, who picked through the pile of finalists and pitched her winners to Clinton. There would be no room for anyone to go rogue.

This audience, members of which paid $100 to see Clinton speak, seemed unlikely candidates for sneaky gotcha questioning. If Clinton inspires outsized rage among her opponents—days earlier, a pipe bomb addressed to her was delivered to her Chappaqua home—she also inspires impassioned gratitude, hope, and fervor among her fans. And when she strolled onstage, looking happier and more relaxed than I can remember her looking at least in the past two years, those fans went wild, as if they were not adults there to see a politician but teens at a Justin Bieber concert.

It is not productive to dwell on the question of what could have been, to let your mind wander into a pleasant fantasy dimension where the electoral vote aligned with the popular vote and we were not plunged daily into fresh chaos concocted by the white nationalist currently occupying the White House. I try to keep my brain on a short leash, but listening to Clinton hold court, I could not fight the feeling that if, during her campaign, she had been as natural, as at-ease, as unapologetically herself as she now appeared, things may have gone differently; if systemic sexism didn't bind women in politics to the impossible-to-win struggle between unflagging congeniality and stoic shows of calm force, and if it didn't drive droves of voters away from women candidates, then we might not now be subject to the whims of a would-be despot.

I found it frankly disorienting to imagine a world in which we had a president who, faced with questions about the dangers of A.I., for example, not only knew what the term meant, but offered a thoughtful, cogent answer that evinced deep knowledge and genuine interest.

Clinton offered considered comments on pretty much every topic Swisher put to her over the course of the hour, a sweeping interview that encompassed domestic and foreign policy; the upcoming midterms; tech and social media; and #MeToo. But the subject that seemed to preoccupy Clinton most was the same one I imagine haunts every audience member's mind: What the hell happened? 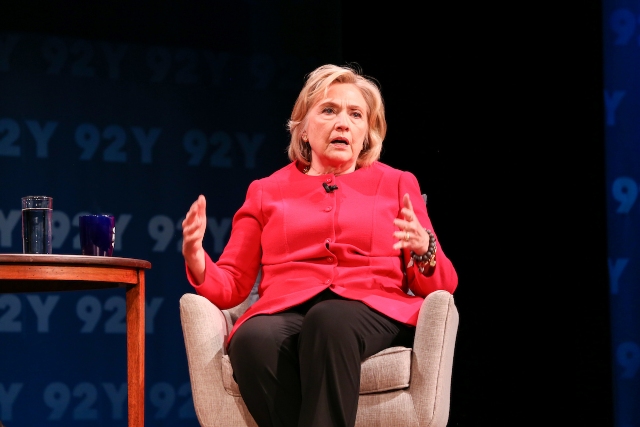 Clinton, of course, addressed this question in a few hundred pages published 10 months after election night 2016. What Happened drew criticism because Clinton seemed to omit her own actions (and actions not taken) from the equation. Many argued that she dodged accountability, scrambling instead through a pile of alternate explanations that sounded, to some, like excuses. Like the candidate herself, the book was described as angry, with the suggestion that Clinton should maybe keep that bitterness to herself.

Clinton did linger on her theories a little longer than Swisher seemed to want, running through the October surprise timeline with studied attention to detail; nodding to voter suppression; returning again and again to the Russian interference she obviously continues to follow with an unswerving eagle eye. The more we learn about corruption within the Trump campaign, though, the less Clinton's conclusions feel like conspiracies. And yet the question of her personal responsibility for 2016's outcome remains.

"I made mistakes, the campaign made mistakes, I don't know any human being who doesn't," she said, asked if she felt personally responsible for the current situation. But an unprecedented set of extreme circumstances stained the election: The hacking. The foreign government quietly pressing its thumb on the scales. The open pandering to the white supremacist currents still marbling American culture. "I don't believe in coincidences," Clinton continued. "When I talk about what happened, I'm not just looking backwards, I'm trying to say: The Russians are still in our election system, we know that social media and other sources of information are being manipulated, we understand that. Let's do something about it."

Yet if Clinton's book attracted criticism for being too sour, the Clinton who sat onstage showed none of that indignation. She seemed comfortable in the spotlight for the first time in recent memory, settling back into her chair and kicking up her heels as if she were scuffing them into her own living room carpet. She cracked jokes, she wryly ribbed her interviewer. She did not apologize for herself.

One apology may have been warranted, though: In a recent interview with CBS Sunday Morning, Clinton said that her husband's affair with Monica Lewinsky, 22 years old and a White House intern at the time, did not strike her as an abuse of power because, as she put it, Lewinsky "was an adult." Swisher invited Clinton to take a "do-over," but the former Senator didn't seem interested.

"Look, I have talked about this before," she said. "This was a really painful, difficult time in my life, and it was also hard for the country. I feel very sorry for what she [Lewinsky] went through and what she was subjected to by the Starr investigation, and everyone who mistreated her, mistreated her—in my opinion—just disgracefully."

"I understand how now, 20 years later, a lot of decisions are being reconsidered or looked at again from different points of view," she went on: she's spent her "entire adult life standing up for women." (Recall that slogan she coined, "Women's rights are human rights.") "I'm not going to re-litigate everything I've ever said," she added. "I have been consistent, ... and I think that people need to take responsibility for themselves and their actions, but I also think we need to make sure that no voice is stifled or ignored at the moment." People always find reasons to get upset over her words and actions, Clinton added. She was not particularly concerned with this latest example.

There's a frustrating kind of cognitive dissonance in Clinton's adamant assertion that Bill did not abuse the power bestowed by his office, the nation's highest, to sustain a coercive relationship with a woman whose professional rank fell unfathomably far below his. Because Clinton does truly understand the ways in which the obliterating force of "primo male presence," as she put it, makes women into collateral damage when they are pushed before the court of public opinion. She praised the "dignity," the "stoicism," the "integrity" of women like Anita Hill and Dr. Christine Blasey Ford, who step up to do their civic duty with the full knowledge that doing so means they'll be crushed by backlash from the indignant outrage of apoplectic men unaccustomed to taking accountability for their actions. She condemned they way that powerful men have leveraged their station to silence and manipulate women. The #MeToo moment, Clinton continued, is "long overdue."

"A lot of us my age, you just sort of sucked it [sexual harassment] up: you didn't complain, you didn't explain, you just sort of tried to get your best outcome," she explained. "I'm really very grateful that we now have a movement, a moment, where young women in particular are able to not only speak up, but to defend themselves; to be as brave as they can be," and know they're not alone doing it. Lewinsky—along with the clutch of other women who have accused Bill of misconduct ranging from sexual harassment to rape—seem to be Clinton's exceptions.

Even as I appreciate the strides Clinton has made on behalf of her gender, I'm disappointed by the selective blindness she exercises towards her husband's bad actions. And I'm disappointed, too, that she's continually made to answer for them. Hillary Clinton is human, and at the center of most Clinton criticism sits the expectation that she always do and say the right thing. That unrealistic level of pressure may explain why she rarely seems authentic: I'm hard pressed to think of another politician who's been raked over the coals for every stumble, in perpetuity, despite their apologies and efforts to understand their errors. Clinton has spent her entire life being publicly picked apart, being damned for what she does and doesn't do. If we want her to explain exactly what happened, we must accept that some of the fault is ours—for creating special, unachievable standards for her, while throwing the concept out the window when it came to her opponent, of whom no one expected anything but the worst.

In any case, she doesn't see your criticism as her problem anymore. "If you don't want to hear what I have to say, don't talk to me, don't report on it, don't come to this event," she shrugged. She isn't going anywhere.

#2016 election
#92nd street Y
#hillary clinton
#kara swisher
#original
Do you know the scoop? Comment below or Send us a Tip