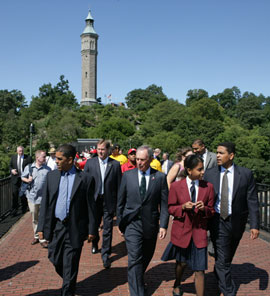 Yesterday, Mayor Bloomberg and other city officials unveiled the newly renovated access path between Highbridge Park and the High Bridge in Manhattan.

The $4.2 million project (which included a new pathway and restored iron stairway between the bridge and a water tower) is part of a $60 million plan to restore the High Bridge as part of Bloomberg's PlaNYC initiative. The Mayor said, "I’d like to think that the High Bridge will do for uptown and the Bronx what the High Line is going to do to revitalize the neighborhoods along the Hudson River.”

It's expected the High Bridge restoration will be complete in 2012. However, some critics worry that maintaining the park will be an issue, as city funding to the parks department has decreased. More about the High Bridge at Forgotten NY, which reminds us it's actually the oldest bridge connecting two boroughs (it was built in 1848!).