New York state's highest court, the Court of Appeals, has ruled that New York City and other local governments can be sued for failing to redesign streets that they know have a history of speeding and crash injuries and deaths.

The ruling rises out of a 2004 crash in which a driver, Louis Pascarella, driving 54 miles per hour on a 30-mile-per-hour stretch of Gerritsen Avenue in Brooklyn, hit Anthony Turturro, then 12, as he was riding his bicycle. Turturro was in a coma for months with skull fractures.

"Parts of his brain were just completely destroyed by the impact, and other parts are completely intact," said the Turturro family's lawyer, Robert Walker. "He fought hard and continues to do so."

The 6-1 appeal decision in Turturro's family's favor means they are on track to finally collect an award that, with interest, will amount to $19-$22 million, 40 percent of which is to come from the city. The family's case hinged on the fact that, at the time of the crash, Gerritsen Beach residents had complained for years that Gerritsen Avenue had a problem with chronic speeding, and was being used as a "racetrack" for drag racers.

The Department of Transportation conducted four studies of three intersections on the road in 2002 and 2004, before the crash, and each time found that speeding was a problem, according to the decision. The DOT's policy is to redesign roads after officials determine that law enforcement action alone cannot curb the danger, according to the ruling. However, with the Gerritsen Avenue studies, each time the DOT referred the issue to the NYPD, which was already aware of it, and failed to follow up with the police department to see if road-safety measures were called for.

In their decision, the Appeals Court majority wrote:

We do not suggest that a municipality has a proprietary duty to keep its roadways free from all unlawful or reckless driving behavior. Under the particular circumstances of this case, however, plaintiffs demonstrated that the City was made aware through repeated complaints of ongoing speeding along Gerritsen Avenue, that the City could have implemented roadway design changes in the form of traffic calming measures to deter speeding, and that the City failed to conduct a study of whether traffic calming measures were appropriate and therefore failed to implement any such measures.

We therefore conclude that the specific acts or omissions that plaintiffs claim caused the injury arose from the City's failure to keep Gerritsen Avenue in a reasonably safe condition.

New York City crash-victim attorney Steve Vaccaro, speaking to Streetsblog, called the decision "a game-changer," and predicted that it could herald a new level of accountability for the DOT failing to implement traffic-calming measures in places where it is aware of speeding being a problem, except in instances where it has specifically studied the problem and found such measures unnecessary.

Walker, though happy with the outcome, was more cautious about the implications, saying, "I don't necessarily see it as a game-changer."

He explained, "Cities are generally aware that there’s speeding on roadways. That happens, we know that..The fact that there’s speeding on the road by itself doesn’t mean anything. In our case, literally there were letters from every federal, state, city, and local politician, as well as local police, as well as laypeople repeatedly complaining that something’s got to be done here." 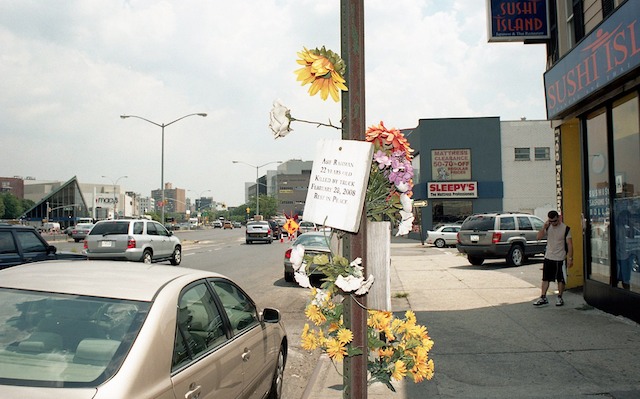 A memorial for a cyclist killed on Queens Boulevard in 2008. The city is in the process of overhauling the street, known as the Boulevard of Death. (triebensee/Flickr)

In a dissenting opinion, Judge Eugene Piggot called the outcome "antithetical to our case law and principles of government immunity." Piggot argued that Pascarella was responsible for speeding, and Turturro for "[riding] his bicycle across a four-lane highway at night," whereas the government has immunity from what happens when it fails to prevent crime. A jury found that Turturro shared 10 percent of the blame, the rest going to Pascarella.

Piggot predicted that thanks to this decision, "municipalities throughout the State will be haled [sic] into court whenever a plaintiff who has been injured on the road at the hands of a speeding or intoxicated motorist is able to identify alternative measures the government could have taken to attempt to prevent the accident."

Gerritsen Avenue, a thoroughfare that runs from the edge of Sheepshead Bay and Marine Park to the southern tip of Gerritsen Beach, has been the scene of 199 crashes since July of 2012, according to NYPD data, including 53 that resulted in injury. Four people died in those crashes.

In 2005, the DOT narrowed Gerritsen to three lanes and put in a painted median near Gotham Avenue, near where Pascarella hit Turturro. The agency scrapped plans for pedestrian islands and bike lanes along the road in the late 2000s after some locals objected. After a drunk driver killed 17-year-old cyclist Sean Ryan last July, near where Turturro was struck, some residents renewed their calls for an overhaul, and this fall the agency moved forward with a redesign.

Though Mayor Bill de Blasio started his term in 2014 with a putatively aggressive road-safety initiative called Vision Zero, aiming to reduce traffic fatalities to zero by 2024, road safety activists have criticized the administration for bowing to pressure from community boards opposed to new traffic calming measures and bike lanes, and for police failing to effectively investigate hit-and-runs. Traffic deaths are down under de Blasio, to 225 in 2016, from 300 in 2013, before he took office, but those gains are almost entirely among drivers and passengers.

Responding to the recent decision in a statement, de Blasio spokesman Austin Finan said, "The City is firmly committed to Vision Zero investments in street redesigns and enforcement that save lives. No legal decision will change that."