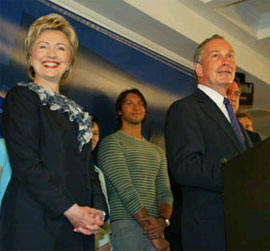 As Senator Hillary Clinton ignores calls to drop out and gets ready for a likely West Virginia primary victory, Politico's Ben Smith reveals one funny suggestion from a NYC politician: Clinton should run for mayor in 2009.

The politician's reasoning is that though it's not being leader of freed world, "it's a big executive job, comes with a media spotlight and a mansion." Smith asked Koch for a comment (Koch yelled at Smith for "wasting his time") and the former mayor who supports Clinton for president said, "She’s not going to run for mayor of New York City, and if she did, I don’t think she could win."

Though Smith thinks Clinton would win the mayoral race easily, hopeful Congressman Anthony Weiner told him, "She may beat me in the popular vote, but I've got more supers." Yeah, and it's unclear how her support in the black community might be faring these days.