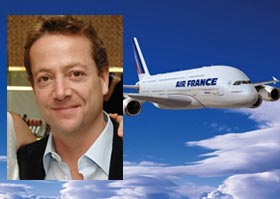 Meet Mathias Guerrand-Hermes: Polo player, heir to the French fashion house Hermès, petulant crotch-grabber. The 36-year-old socialite is in the papers today after being arraigned in Brooklyn federal court over a nasty incident aboard an Air France flight from Paris to JFK on Tuesday. Prosecutors say it all started when Guerrand-Hermes—loaded on booze and the pain medication Propofan—began pestering a female passenger in first class. When her husband told him to step off, Guerrand-Hermes, who was perched on the lady's armrest, simply moved in closer.

Then things (allegedly!) got heavy. The crew members ordered the drunken Hermes back to his seat, but he refused. Then the captain emerged from the cockpit to try and smooth things over by relocating Guerrand-Hermes to a different seat. In retaliation, the Post says the "haute-head" reached out and "grabbed the captain's genital area." The pilot shoved him and instructed the crew to move him a few rows back, ordering Guerrand-Hermes to behave. According to the complaint, his response, "I am not going to behave myself," as he tried to punch the pilot.

After tackling him to the floor, it took the captain and three male flight attendants to restrain Guerrand-Hermes with handcuffs and shackles, and he remained tied to his seat for the rest of the flight. After a brief court appearance yesterday—Newsday reports that he had a cut below his lip and his blue long-sleeved shirt was torn—he was released on $50,000 bond and given back his belt and shoelaces. He's charged with one count of interfering with flight crew members, which the Times says which carries a maximum of six months in prison as long as there is no previous criminal history. Confronted by a Post reporter outside his East 75th Street building, Guerrand-Hermes wondered, "What are you doing at my house? Will you please leave my house before the police come?"

#Air France
#arrest
#arrested
#fashion
#flight
#Guerrand-Hermes
#heir
#hermes
#rich
Do you know the scoop? Comment below or Send us a Tip
A new Gothamist is coming! We’ve moved comments over to our beta site. Click here to join the conversation and get a preview of our new website.