If you've walked through Cadman Plaza in Downtown Brooklyn or any number of other New York area parks in recent weeks, you may have noticed dead leaves on the ground. In Cadman Plaza, the ground is covered with them. Look up, and the tree canopy is speckled with brown. On a humid day in the middle of summer, this is confusing.

This is a tree pathogen called Anthracnose. It is a fungal disease that commonly affects London plane trees (LPs), the most common tree in Cadman Plaza. This is a very common tree pathogen for LPs, but is rarely fatal. In most cases, the trees recover on their own.

Ferguson said that the infection can recur annually, and Cadman Plaza's trees seem to have gotten the bug repeatedly over the past several years. Recurring infections can cause more severe damage over time. Prolonged wet, warm spring weather can increase the number of trees affected, Ferguson said.

Removing the fallen leaves in autumn, she said, cuts down on the number of spores, and is the best treatment, given that fungicides can harm humans. 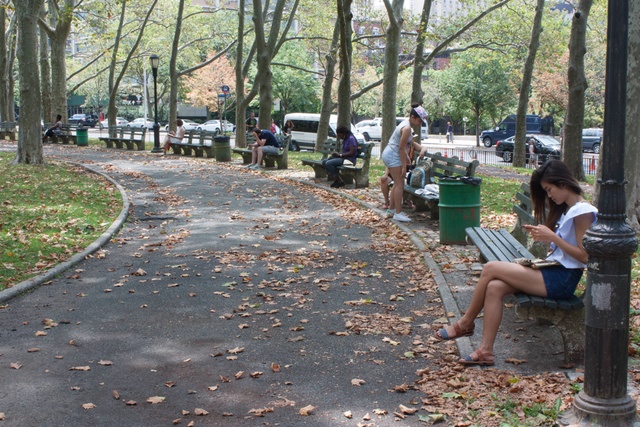 We ran all this by Deanna Curtis, the New York Botanical Garden's curator of woody plants, and she said Parks is on the money here. Curtis called the fungus "exceedingly common," and said, "A healthy sycamore can push out a second flush of new growth and recover."

London planes are popular with urban planners for their ability to withstand air pollution, lack of water, and other hardships particular to big-city plants.

An anthracnose infection can also take hold in a tree's buds, shoots, and twigs, and though anthracnose doesn't often kill trees, it can force them to regenerate a year's worth of leaves in a season to survive.

"A healthy tree is going to have a greater ability to recover form it," Curtis said. By contrast, urban trees stressed from other factors such as nearby construction are at greater risk.

The more you know!