Here's Why Drivers Still Get Away With Murder In NYC

Six months after NYPD Commissioner Ray Kelly promised substantive reforms in the way the department responds to and investigates crashes, the City Council's Transportation and Public Safety Committees held a joint hearing today to examine the changes. While the size of the department's re-named Collision Investigation Squad has increased, it appears that little else has been done to improve the quality of crash investigations, hold negligent and dangerous drivers accountable for their actions, or use department resources to better target the types of behaviors that endanger pedestrians, cyclists, and motorists alike.

In some respects, much has changed since the first joint hearing on the matter in 2012, in which the head of the NYPD's Transportation Bureau, Deputy Commissioner John Cassidy, told councilmembers that the department's Accident Investigation Squad only investigated crashes in which the victim is likely to die. Now, the more accurately named Collision Investigation Squad investigates crashes in which victims are dead, likely to die, in critical condition, or if there are particular injuries or "unique circumstances" to warrant an investigation.

Cassidy testified today that there was a 23% increase in the number of investigations performed by the 22 investigators, four sergeants, and one lieutenant in CIS from last year (238) to this year (293). Traffic fatalities are also down by 2% year to year.

But it's not known how many of the crashes that are investigated by CIS involve non-fatal, non-critical injuries, such as the tourist who had her leg amputated after an enraged cab driver plowed into her on the sidewalk in Midtown (he wasn't charged with a crime). The NYPD doesn't keep records of these ad hoc decisions that are made by the officers on the scene and Captain of the precinct, decisions that can prove vital in conducting a proper investigation.

Notably, the CIS' success rate in bringing charges against drivers hasn't changed in the past ten years. Inspector Paul Ciorra testified that of the 189 fatalities investigated by CIS this year, 20 were closed with an arrest. In 58 cases, drivers were issued one or more summonses; in 3 cases the leads were "exhausted;" and in 102 cases there was no action by the NYPD. (Presumably these numbers don't add up to 189 because six are still under investigation.)

"When you look at the history of these cases as I have, in the last 10 years, somewhere between 10 to 20% of the cases will get closed to an arrest, 10% to 30% will be closed to a summonses, and the others are deemed a collision," Ciorra said. By comparison, NYPD homicide detectives had a 75% success rate in 2012.

CIS methodology is also notable because it involves the DA's office at the outset of almost every investigation. Unless a motorist is intoxicated or leaves the scene of the crash, the CIS consults with the DA's office before making an arrest, and the DA determines whether criminal charges may be brought.

Councilmember Peter Vallone, Jr. asked the NYPD representatives why he could be immediately arrested for stealing a colleague's phone but that seemingly blatant acts of negligence or criminality on the part of motorists requires consultation with the DA.

"There's a lot of case law that has developed around the issue of whether or not vehicle accidents can be subject to criminal action," NYPD Legal Affairs Assistant Commissioner Susan Petito explained. "The DA is a critical part in this. They will be able to tell us whether or not the case is prosecutable under a lot of case law that is developed separate of the penal law."

Vallone asked Petito if she could sum up that case law.

"I'm not an expert, but I know that there is a lot of case law about how many traffic violations have to be associated with an action before vehicular manslaughter is charged," Petito said. "I apologize, I don't know this area of law at all." 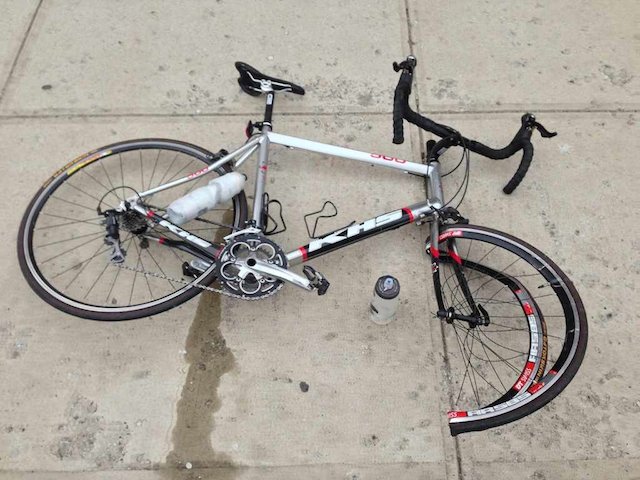 John Kelly's mangled bike. Kelly was struck by a van in Queens and can ID in the van, but the NYPD has still yet to investigate his case (John Kelly)

"If Ms. Petito—a lawyer of the NYPD Legal Bureau designated by the Police Department to provide information to the city council at a crash investigation oversight hearing—is unable to answer this question, we can assume that rank-and-file officers and detectives responding to crashes can't understand it either," attorney and activist Steve Vaccaro writes in an email. Without evidence, there is no case.

"That is the current NYPD practice: evidence of reckless or other criminal wrongdoing (other than intoxication or leaving the scene) is virtually never identified, preserved and considered as a basis for criminal charges."

Speed was the most common factor in pedestrian fatalities last year. Despite a few recent increases in enforcement, Councilmember James Vacca said he is swamped in his Bronx district with complaints about speeding. "[The drivers] think that the road is theirs and they have no consideration for other people, and it is scary." He then asked Commissioner Cassidy how many radar guns there were in each precinct and whether they were being used.

"The average is supposed to be four. That gives them the ability if one or two go down…In every precinct there are speed guns and specific officers that are trained by the Highway Patrol in the utilization of these tools," Cassidy said.

Later, after the NYPD representatives left, Vacca voiced skepticism at the claim.

"I doubt every precinct has four, I just find that hard to believe. I will be pursuing this."

The NYPD was around to hear Councilmember Jimmy Van Bramer admonish the fact that the driver who jumped the curb on the sidewalk in his district, killing a 16-year-old, received nothing but an administrative summons. But they missed the testimony from Jacob Stevens, whose wife, Clara Heyworth, was killed by a motorist in 2011. Heyworth was crossing Vanderbilt Avenue in Brooklyn when she was struck by an unlicensed and allegedly intoxicated driver. In the end, the driver, Anthony Webb, faced no criminal charges, and Stevens is still fighting in court to find out why the NYPD didn't conduct an investigation of his wife's death until it was too late.

"You need to be very careful and very aware of what discretion the CIS has in choosing which cases to respond," Stevens told the councilmembers. "I would support expanding it further to…every case of serious physical injuries, because those injuries could ruin someone life and in some cases, in my wife's case, they die of their injuries."

#cis
#highway patrol
#no criminality suspected
#original
Do you know the scoop? Comment below or Send us a Tip