Two days after approving New York City’s first round of early voting sites, we have the list of locations to share with you, the voting public. The New York City Board of Elections approved the 38 voting sites on Tuesday, when Executive Director Michael Ryan read the locations out loud at the commissioners’ public meeting.

That list of locations was not officially confirmed, and although NYC BOE staff indicated the information would be shared online May 1st, so far that has not happened. But Gothamist/WNYC has exclusively obtained the list of early voting sites approved by the NYC BOE. Here is a map showing the voting sites overlaid with City Council districts; you'll also find the locations in list form at the bottom of this story:

While these locations were approved by the city’s commissioners, State Board of Elections spokesman John Conklin said as of Thursday morning only 28 of New York’s 62 counties submitted their early-voting sites on time—and New York City’s BOE was not among them. The city just submitted their locations Thursday afternoon.

Under the state’s new early-voting law, New York voters will be able to cast ballots nine days before Election Day, starting with this November’s general election. Exactly how this will work in New York City is a matter for the city’s Board of Elections, an agency whose performance has been admonished by voters, elected officials and even the Justice Department.

Their first test was to select locations. They chose 38 of them, a number so sparse there are 21 City Council districts without a single early-voting site, including City Council Speaker Corey Johnson's district and the district formerly represented by Mayor Bill de Blasio and now represented by Brad Lander.

This week the mayor stepped into the fray, urging the agency to select many more voting locations citywide, up to 100 sites or roughly two per City Council district. He even dangled a tantalizing $75 million to pay for it. On Twitter, de Blasio slammed the Board for lowballing the number of sites and set a date of May 29th for the agency to revamp and expand its list.

The date of May 29th was not arbitrary. That’s when the state election officials will determine how much grant money each county will receive as a reimbursement for its early-voting costs. If New York City added more locations before May 29th, the state BOE could alter the grant allocations. If changes come later, no more money would follow.

“Counties are free to make changes after that date,” said Conklin, the state BOE spokesman, “but we will not change the grant allocation after that date.”

In testimony at a City Council hearing on Tuesday, supporters of voting reforms pointed to other states with more expansive models of early voting. New York is the 38th state in the nation to adopt it.

Susan Lerner of Common Cause and the Let NY Vote Coalition pointed to large Colorado counties, with lower populations than New York City boroughs, where there are 25-35 early voting centers per county. She said there should be at least one early voting site per Assembly District (there are 65 Assembly districts in the city.)

Ryan, the board’s executive director, signaled that this initial list of 38 sites was just an opening offer and that the Board would be willing to work with the mayor and advocates to expand the number of locations.

Advocates recommended the city set up vote centers where any registered voter in a county could vote, a model that’s used in large counties in California, Arizona and even Texas.

On top of all that, Ryan said the Board was facing resistance from some places that don’t want to be used for early voting because of the time obligation. For the schools, churches and other locations, each election event requires 11 days of use - nine days of early voting, plus one day to set up and Election Day.

But over the course of the year, the impact is actually 44 days when taking into account the general election in November 2019, the April presidential primary in 2020, the federal and state primary in June 2020, and the November 2020 election. 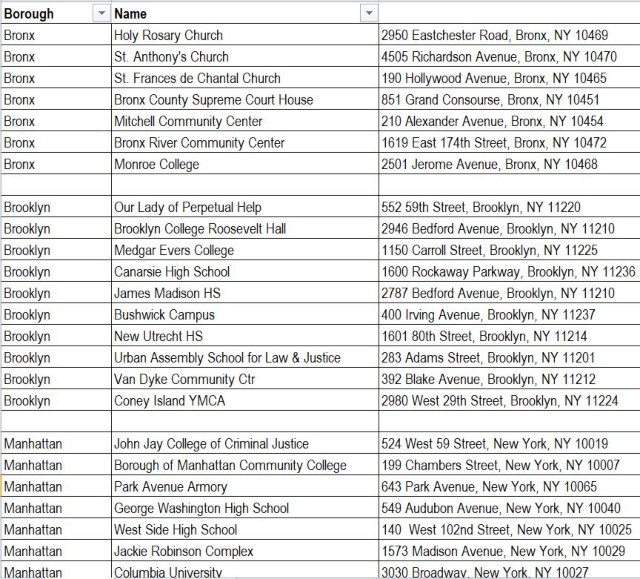 #boe
#early voting
#elections
#poll sites
#voting
#original
Do you know the scoop? Comment below or Send us a Tip