The Central Park Precinct Community Council held its regular meeting last night, and the main subject of talk was bicyclists. Central Park Precinct commanding officer Captain Jessica Corey said that contrary to news stories claiming that a crackdown on allegedly "psycho cyclists" had started recently, this is actually part of an "ongoing" initiative that's been underway for a while. "I've heard people say we started 2 weeks ago or 1 week ago, and it's not true," said Corey. "We've always [enforced the law]." Noting how the NYPD has been distributing brochures about better cycling, Corey explained, "We're trying to educate" everyone.

She suggested that part of the problem stems from the fact that many people who use the park are one-time users, such as customers who rent bicycles from illegal bicycle rental operators (they don't typically educate customers on safety rules) and tourists, so the education efforts' effectiveness may be limited. Other community members made sure to mention that bad pedestrians—people pushing strollers, people on their cellphones, people with dogs—who jaywalk and cut off cyclists were also harming the quality-of-life in the park. 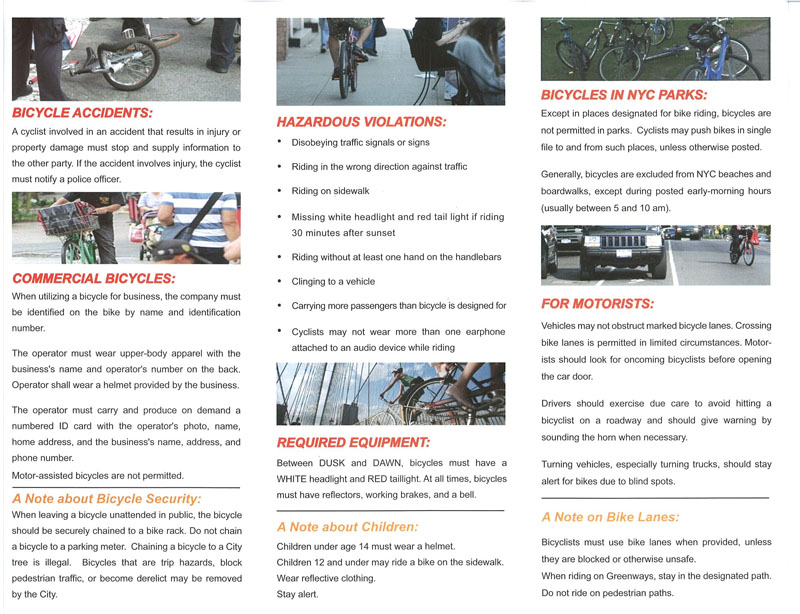 Another question lobbed at Corey dealt with an assumption that before 7 a.m., when there's little pedestrian traffic, cyclists are allowed to run red lights. Corey said, "The law is the law and the red lights are to be enforced"—if a cyclist were to accidentally hit a pedestrian before 7 a.m. while running a red light, it's not like the police can ignore that the cyclist broke the law. 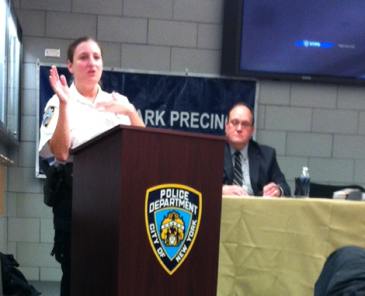 There was also concerns expressed that during car hours, cyclists and pedestrians were getting too crowded in the non-vehicle lane. Cyclists, in particular, said they're being pushed out of their lane by runners forcing them into car traffic. Bob Reeves of the Parks Enforcement Patrol confirmed that the Central Park Conservancy was still thinking about turning over another lane of car traffic to bicycles, the way Prospect Park has. (One note: During Prospect Park's car-free hours, the lights are all green until a pedestrian pushes a button to cross the road; apparently the lights in Central Park are too antiquated for that to happen.)

Carol Waaser, a board member of the New York Cycle Club (Corey praised the group's cycling protocol, which heavily emphasizes that cyclists must yield to pedestrians), said, "This is New York City, and everyone in New York City feels they have the god-given right to do whatever it is they're doing at that particular moment." The point, Waaser said, was that we all need to respect each other as we try to find ways to make the park better for everyone.

Corey shared an anecdote from being in the park on Sunday: At 2 p.m., when the park was full of people, four cyclists were racing down the drive—the community members were horrified and immediately said, "That's unacceptable"—and two zoomed past a woman pushing a stroller on one side and the other two were on the other side. Corey stopped them and spoke to them. She didn't summons them (she doesn't carry summons with her since she's not at the traffic enforcement level anymore), but Corey wanted them to know what they were doing was wrong, "And they really were remorseful," adding that one of cyclists spoke to her yesterday and was apologetic, telling her that she was right and what they were doing was wrong.