Things are going to be very different for cyclists blazing down the Williamsburg Bridge onto Delancey in about five months, when the DOT finishes a dramatic new redesign at the entrance/exit to the bridge's bike and pedestrian path. Three foot high concrete concrete barriers at the base of the bridge will force Manhattan-bound cyclists to come to a full stop, and there will be a curved fence steering northbound bikers toward Clinton Street. The project will significantly change the way some 4,000 New Yorkers a day use the city's most bike-heavy bridge... And there are some differences of opinion about it!

"It’s not clear what problem the DOT is trying to solve with their fence," Transportation Alternatives' Joseph Ferris tells us. "In our opinion, the big problem on the Manhattan-side of the Williamsburg Bridge is the traffic on Delancey Street—it’s one of the most dangerous streets in New York City. This spring and summer at least one pedestrian and one cyclist have been killed on Delancey, and between 2008 and 2010, 134 walkers and bicyclists were struck.

"Assembly Speaker Silver, State Senator Squadron, Council Member Chin and Borough President Stringer have all asked for safety fixes. The Williamsburg Bridge is the most heavily-cycled bridge in North America, depositing thousands of cyclists a day onto Delancey Street, and whether you bike, walk, drive or take the train there, you know that crossing Delancey isn’t a love story, it’s a horror."

Cyclist and environmental activist Bill Di Paola of Time's Up! has also criticized the changes, which he guesses are one third of the way complete. In an interview with The Villager, he says, "D.O.T. forgets it’s an exit and an entrance. But it’s more important for exiters, since they’re coming off at high speed." Once the changes are complete, Di Paola predicts, "You’ll see a lot of near injuries, people hitting into each other, especially the skateboarders — they can’t stop. It’s going to be chaos."

Di Paola and Time's Up! have come up with an alternative, which the DOT is not considering—a pity because it's pretty appealing. (It would also, unfortunately, be expensive.) The Time's Up alternative would create a new ramp that would start about 75 feet up the bridge on the Manhattan side and reach ground level at Delancey Street, where a bike path would run through a new parkway for several blocks. Here's a rendering: 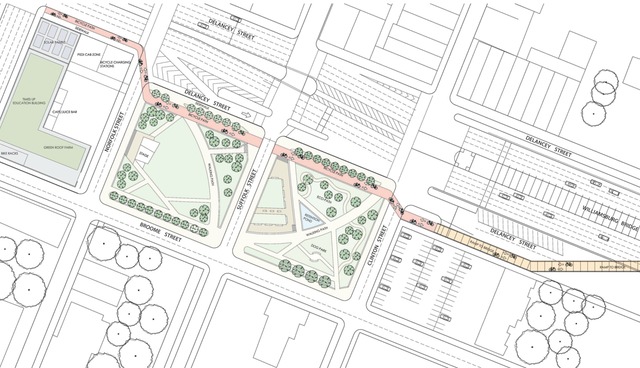 DOT workers anticipate the project will be complete sometime after January 1st, so you still have a few more months to get some brakes for your fixie.