Here's How You Can Report Voting Problems On Election Day

In case you were unaware, there's a presidential election happening tomorrow. Weird, right? These things have a way of just sneaking up on you.

Republican presidential candidate Donald Trump, usually a model of restraint, and fact-oriented to the point of tedium, made an uncharacteristic appeal to paranoia and racism at an August rally in Ohio, telling supporters to head to the polls because, "You’ve got to get everybody to go out and watch, and go out and vote. And when [I] say ‘watch,’ you know what I’m talking about, right?"

Okay, this Trump fellow might have somewhat of a muted, mostly unnoticed demagogic streak going on, because he also told supporters in Altoona, Pennsylvania, "I hope you people can[…]not just vote on the 8th, [but] go around and look and watch other polling places and make sure that it’s 100-percent fine. We’re going to watch Pennsylvania—go down to certain areas and watch and study—[and] make sure other people don’t come in and vote five times[...]The only way we can lose, in my opinion—and I really mean this, Pennsylvania—is if cheating goes on."

So: proven voter fraud is so rare nationally as to be nearly nonexistent—though no investigation into alleged organized fraud in Williamsburg during the 2013 city primary has been publicized —the Philadelphia GOP has said it has no plans to challenge voters at the polls en masse on Election Day. In New Jersey, Republicans are barred from deploying poll watchers due to a 1982 consent decree stemming from allegations that the party sent armed off-duty law enforcement officers to polling places in urban areas wearing “National Ballot Security Task Force” armbands.

As for New York, presidential-election-wise, the state is so blue that the only thing chest-puffing Republican poll watchers in New York City could conceivably gain on Election Day is a sense of personal dominance and a few thousand extra steps on the old Fitbit. Then again, control of the state Senate is up for grabs in a handful of races outside the city. That said, the New York City Board of Elections has more than its share of problems thanks to the state's restrictive voter rules and the Election Boards' unaccountable, nepotistic hiring process, so Tuesday could bring any number of snafus at the polls.

"My office is committed to ensuring that all eligible voters are able to cast an effective ballot on Election Day," Schneiderman said in a statement. "If voters encounter any barriers to voting or improprieties at the ballot box, call my office immediately."

The Attorney General's Office hotline number is (800) 771-7755, and voters can also reach the office by emailing civil.rights@ag.ny.gov. 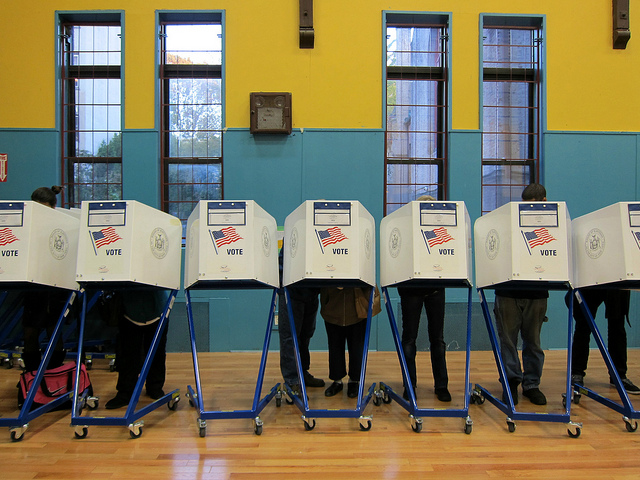 During the April 19th presidential primary, Schneiderman's office received more than 1,000 complaints about irregularities, and his people are still looking into voting practices statewide in response, according to its announcement about this election's hotline.

Among other things, according to the announcement:

The U.S. Attorney's Office hotlines are, for the Southern District of New York, which stretches from Dutchess and Sullivan counties south to Manhattan, (646) 369-4739; and for the Eastern District, covering Staten Island, Brooklyn, Queens, and the rest of Long Island, (718) 254-6323. From the feds' announcement:

Federal law protects against such crimes as intimidating or bribing voters, buying and selling votes, impersonating voters, altering vote tallies, stuffing ballot boxes, and marking ballots for voters against their wishes or without their input. It also contains special protections for the rights of voters and provides that they can vote free from acts that intimidate or harass them. For example, actions of persons designed to interrupt or intimidate voters at polling places by questioning or challenging them, or by photographing or videotaping them, under the pretext that these are actions to uncover illegal voting, may violate federal voting rights law. Further, federal law protects the right of voters to mark their own ballot or to be assisted by a person of their choice.

Gothamist is also interested in hearing from readers who are having trouble voting, or who witnessed polling place hiccups/shenanigans. You can email us tips here.

Aaaand the city Comprtoller's Office is getting in on the act, with an online complaint form you can fill out here.

On Friday night, in response to a lawsuit challenging the NYC BOE's methods for purging voters from its rolls, a federal judge issued an order requiring poll workers to provide affidavit ballots to all voters who believe they are registered to vote but whose names don't appear on voter lists at poll sites. This was already the policy of the BOE, but the agency now advertises it on the home page of its website, and is supposed to reiterate the directive to all poll workers ahead of tomorrow.

To reach the BOE directly with questions, the main office number is (866) 868-3692. Contact information for each of the borough offices is here.

Polls are open on Tuesday from 6 a.m. to 9 p.m. To find your polling place, click here.