New Yorkers who use wheelchairs have noted the difficulties of navigating the subway system—about 106 out of a total of 422 stations are ADA-accessible, turning simple commutes into hours-long ordeals for the disabled. To illustrate this madness, subway enthusiast Matthew Ahn drew up an MTA map that shows what the subway system looks like if you're relying on only ADA-accessible stations—see below: 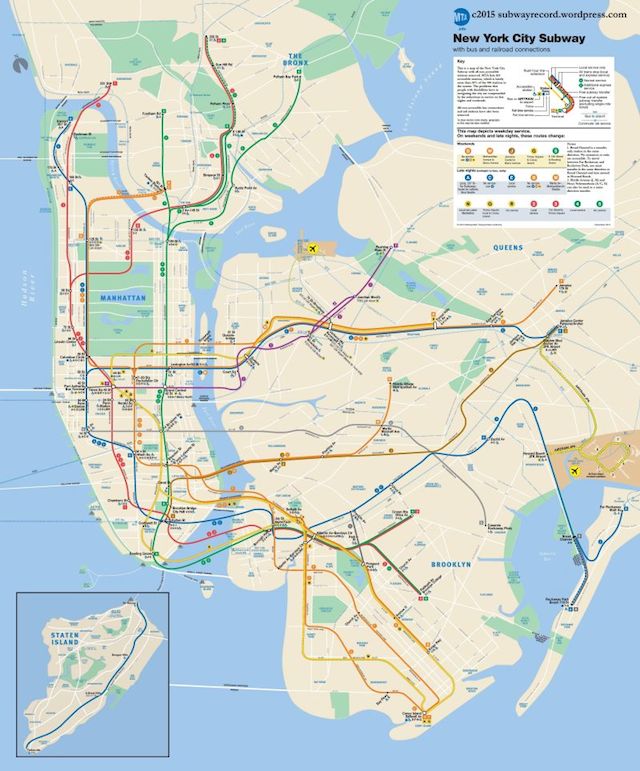 As you can see, the best place for subway riders reliant upon wheelchairs in Manhattan is Midtown, where major stations like 42 St-Port Authority, Times Sq-42 St, and Grand Central-42 St boast accessibility. But large swaths of the system have no accessibility—the 4,5,6 line is barren from 125 St to 51 St, and there's nothing from Dyckman St to 96 St on the 1 train.

Things are even hairier in the boroughs. In Brooklyn, there's no L train accessibility from 14 St-Union Sq to Myrtle-Wyckoff Aves. The N train lacks accessible stations from Atlantic Av-Barclays Ctr to Coney Island-Stillwell Ave, and there's nothing on the R train after Atlantic Av—similarly, the J train's without accessibility from Flushing Ave all the way to Jamaica Center-Parsons/Archer. It's worse in Queens, where the N and Q trains might as well not exist for the wheelchair-bound, while the EFMR trains boast only a few accessible stations, with nothing from Jackson Hts-Roosevelt Av until Forest Hills-71 Av. In the Bronx, the only available transfer station is at Yankee Stadium.

So things are pretty difficult for disabled subway riders, which is hard to imagine when you're used to the subway map looking like this: 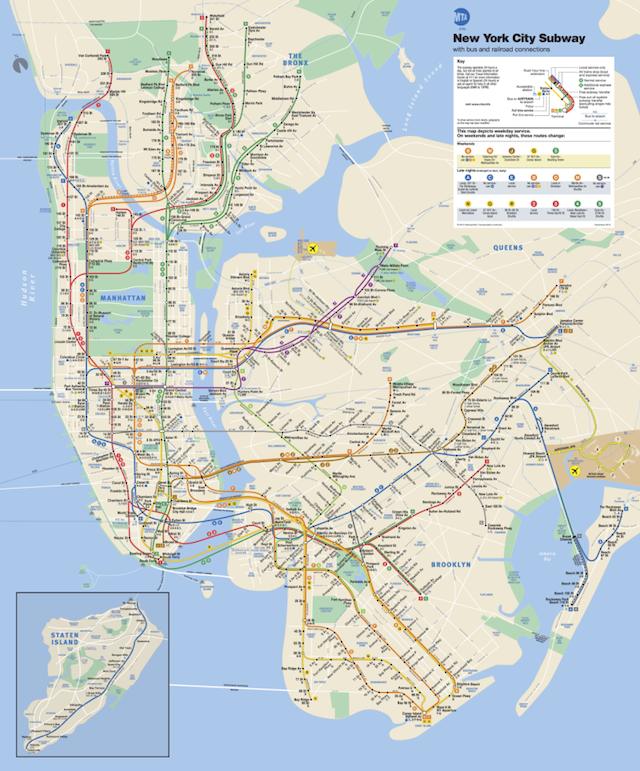 The MTA, for its part, points out that our subway system has more ADA-compliant stations than any other system in the country, and the agency plans to make a total of 100 "Key Stations" accessible by 2020. The MTA will install ADA-accessible elevators in the following stations over the next five years: Times Square-42nd Street/Shuttle station, Chambers Street/Nassau, Bedford Park Boulevard/Concourse, and Gun Hill Road/Dyre in the Bronx; Astoria Boulevard/Astoria in Queens; and Bedford Avenue/Canarsie, 59th Street/4th Avenue, 86th Street/4th Avenue, Eastern Parkway-Brooklyn Museum/Eastern Parkway, Greenpoint Avenue/Crosstown, and Canarsie-Rockaway Parkway/Canarsie in Brooklyn.

The agency has also allocated additional funds to make a number of "non-Key" stations accessible as well.

"Our accessibility is an impressive accomplishment for a system that is almost 111 years old, in which almost all stations were built without regard for accessibility," MTA spokesperson Adam Lisberg told us in a statement. "Installing a single elevator can take more than $10 million and require more than a year of work to obtain street space, reroute utilities and reconstruct station components. In some stations, it is almost physically impossible—and certainly cost-prohibitive—to install ADA-compliant elevators."

Still, getting around in a wheelchair isn't easy, and it's not just the subway that poses a challenge for disabled New Yorkers. All city buses are ADA-accessible, but only 4 percent of city cabs are wheelchair-accessible, and Uber hasn't provided a single wheelchair accessible vehicle, according to an article in the Huffington Post from earlier this year. As Edith Prentiss, a disabled New Yorker we interviewed in 2013, asks, "And you wonder why unemployment is so common among the disabled?"