Activists often argue that Airbnb is driving up New York City rents by allowing fly-by-night hoteliers to illegally rent out whole apartments year-round, thus taking much-needed housing off the market. The data news site FiveThirtyEight commissioned data from the for-profit Airbnb data-scraping service Airdna to understand the prevalence of whole-apartment rentals in cities nationwide, and concluded in its headline that "Airbnb Probably Isn't Driving Rents Up Much, At Least Yet."

[T]he analysis shows that listings that are operated commercially, though a small minority, represent a major chunk of all host revenue. That’s especially important in cities such as New York, Los Angeles and San Francisco, where low vacancy rates, rising rents and progressive populations make Airbnb a prime target for activists and politicians seeking tougher regulations.

The data for New York shows that between June 2015 and May 2016 about 8 percent, or 2,464 of the city's 30,800 Airbnb listings offered whole apartments for more than 180 days out of the year. The listings account for $384 million in host revenue, 32.5 percent of all the host money made in New York. Airbnb takes a 3 percent cut of host fees, plus a 6-12 percent charge to guests for "service fees."

In New York, rentals where the owner is not present and the stay lasts less than 30 days are illegal under state law. Still, here in a city of 8.5 million with about 3.5 million apartments, it's easy to see 2,400 apartments as negligible in the grand scheme of things.

Looked at through the lens of New York's severe housing shortage, however, another picture emerges. A city housing survey in 2014 found that just 3.45 percent, or 75,900 of New York's 2.2 million apartments were vacant at a given time. Last month, data compiled by the firm Citi Habitats showed that just 1.92 percent, or 16,500 of Manhattan's about 854,000 apartments were available. In this context, 2,400 apartments (more or less) is kind of a big deal.

Murray Cox, an activist with the group Inside Airbnb, called FiveThirtyEight's 180-day threshold for classifying listings as commercial "very conservative," pointing out that San Francisco limits whole-unit rentals to 90 days in a year.

Along those lines, a recent report by MFY Legal Services and Housing Conservation Coordinators defined "impact listings" as whole apartment listings that are rented for less than 30 days, booked more than once a month, and listed more than either 3 or 6 months out of the year. Their analysis found 8,058 such units in New York, and determined that if all else remained equal and those apartments were returned to the rental market, the citywide vacancy rate would rise to 4 percent. 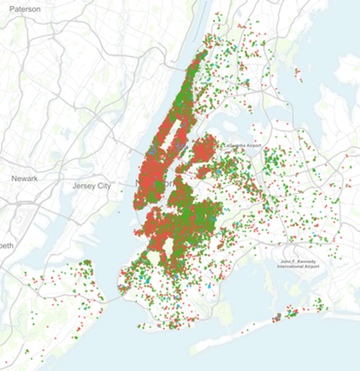 Furthermore, listings are especially concentrated in lower Manhattan and gentrifying Brooklyn neighborhoods, meaning they account for a larger percentage of apartments that could otherwise be on the market there. In the East Village, where the trend was most pronounced, there was one commercial Airbnb listing for every five vacant apartments.

An Airbnb spokesman said that the data cited by FiveThirtyEight is flawed because: a) the "commercial" units could represent apartments and homes being sublet long-term through Airbnb, which is legal, and b) hosts could be traveling for much of the year, given New York's role as a creative hub (those listings, if short-term, would still be illegal). Airbnb regularly removes bad actors with multiple whole-apartment listings, the spokesman said, and has taken off 2,570 listings since November 2015.

Citing an Airbnb statistic showing that 96 percent of entire-home hosts have only one listing, the spokesman said in a statement, "The overwhelming majority of hosts in New York City share their own home. They rely on Airbnb as an economic lifeline to help earn extra money and cover the costs of living in an increasingly expensive city."

The spokesman said the company plans to eventually release more granular data—activists have long said that Airbnb is in no position to criticize the conclusions of data scrapers as long as it keeps secret the details of who is renting which properties, and for how long—but that it wants to be careful about protecting host privacy. Andru Okun, with the New Orleans-focused NOLA Rental Report, said that Airbnb has recently worked to reconfigure its website to thwart data scrapers.

"Airbnb has been actively working to suppress the release of data," Okun said. "There's no transparency. City planners can't plan in an effective manner without real numbers." (The Airbnb spokesman said he wasn't aware of an effort to thwart data scrapers, but he'd look into it.)

The company drew criticism from state and city officials after Inside Airbnb showed it had purged about 1,500 illegal listings before releasing data last December, apparently to burnish its image. (The spokesman said Airbnb was simply following through in what company leaders had promised to do.) Airbnb also purged more than 2,000 listings in 2014, when Attorney General Eric Schneiderman said that his office's research showed more than two thirds of the apartment listings for New York City were illegal.

Cox said that, unless legislators create a limit on the number of days an apartment can be rented per year, a la San Francisco, New York city and state legislators' focus on enforcing the short-term rental ban will do. "I think the approach that New York is taking is the best one," he said.

More than half of Airbnb listings in New York are for whole homes or apartments, many if not most of which would be illegal under current state law, according to Airbnb's own data, and two thirds of listings are likely booked more than 60 days out of the year, according to Inside Airbnb. A proposed law would make even posting ads for whole apartments illegal.

Cox said that the startup's resistance to turning over even anonymized data shows that it doesn't care about concerns that it is adding pressure to an already extremely tight housing market.

"If they were really interested in accountability, they would be trying to work within the intent of [government] regulations and working with cities to protect affordable housing, and addressing what is abuse of the platform and what it is people are interested in protecting about neighborhoods," he said. "I think that Airbnb isn’t interested in doing that at all. I think they’re interested in defending anything that they see as an attack on their revenue."