Here's a Tip: Service Industry Gets Screwed This Year 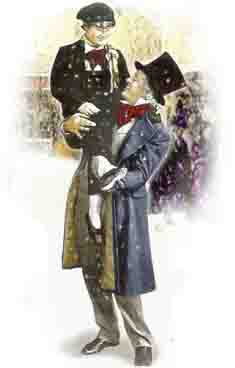 It's that time of year again when everybody's looking for a handout, and those of us with means are expected to dole out extra cash to the help as thanks for simply doing their jobs. And just because this sucker's going down, that doesn't mean you're off the hook when it comes to holiday tipping, or so says the rich liberal elitist media. Despite citing surveys that at least 30% of respondents plan on tipping less (or zilch) because of the recession, the latte sippers at WABC insist"you've got to do your best to give something, particularly cash."

And they're probably right—these people do a lot of shit work, and even shit work is now harder to come by, and they probably have several unemployed relatives mooching off them right now, and everything costs a lot more, too. Still, etiquette expert Patricia Fitzpatrick says you might be able to get away with tipping a little less this year if you include an "effusive" thank-you note in the envelope. Because depending on how important you are, the recipient might be able to get some cash for it on eBay?

Anyway, we went over all the basics last year in our definitive guide to how much to tip everyone from your super to your paperboy. NY1 has more on the subject, as does Charles Dickens, whose protagonist Ebenezer Scrooge famously dismissed Christmas as "a poor excuse for picking a man's pocket every twenty-fifth of December." Of course, Scrooge says that early in the story, before he gets confused by those hallucinations and starts throwing money away on that family of grifters with the fake cripple kid. By the way, how much are you tipping your trash collectors? MSN says it should be at least $20 each.