Here's A Map of The Places in the U.S. Where No One Lives

That recent unspooling of a U.S. Census data is the gift that keeps on giving, like bottomless french fries. As nerds with superior visual-spatial skills and affinities for minimalist design are wont to do, designer Nik Freeman has mapped out all the places in the U.S. where people don't live—it's pretty, and pretty eye-opening.

As you would expect, large swaths of land covered by bodies of water and other prohibitive life-living natural hazards like deserts are unpopulated, as well as protected areas like national parks and nature preserves. But also included are places like shopping centers and strip malls, because although they are frequently populated, people rarely live there. Per Freeman's explainer:

Commercial and industrial areas are also likely to be green on this map. The local shopping mall, an office park, a warehouse district or a factory may have their own Census Blocks. But if people don’t live there, they will be considered “uninhabited”. So it should be noted that just because a block is unoccupied, that does not mean it is undeveloped.

There are a couple of other, non-obvious anomalies that also crop up: Apparently, not a whole lot of people are living in northern Maine, for whatever reason. And the Dakotas?

But in the Dakotas, northern South Dakota is quite distinct from southern North Dakota. This is especially surprising considering that the county-level population density on both sides of the border is about the same at less than 10 people per square mile. 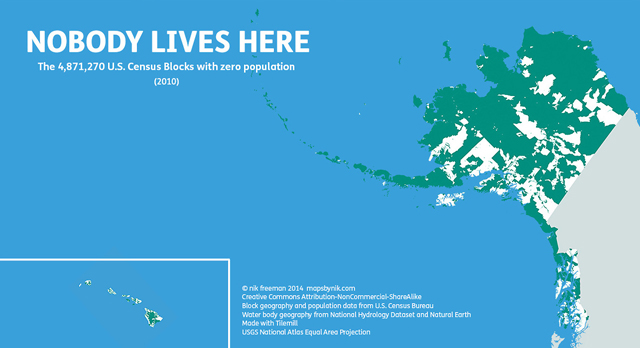 With more Americans abandoning the suburbs to live in cities, what this map will look like in another decade will certainly be interesting.