One of the most familiar sights on a New York City sidewalk is getting a makeover—come next year, you may be seeing new trash cans.

After a public competition for submissions, the Department of Sanitation has unveiled the 3 finalists for its BetterBin trash can update, and announced that 12 prototypes of each design will be tested in the summer of 2019.

And the finalists are...

The Sanitation Department, which partnered with the Van Alen Institute to run the competition, noted in a press release that New York City is home to more than 23,000 litter baskets (that number has been going down, however). They went on to explain the redesign plan: "The most widespread design—the green, wire-mesh basket—is affordable, easy to service and has remained largely unchanged since the 1930s. While iconic to the streets of New York, the wire basket is in need of a redesign to better address the current and future waste needs of the City. The BetterBin competition seeks entries to design a new litter basket that can improve the quality of life for New Yorkers and the Sanitation Workers who service them while keeping New York City healthy, safe and clean."

Sanitation Commissioner Kathryn Garcia said that they received "nearly 200 submissions from around the world." Each of the finalists will receive $40,000 to produce the prototypes, and the prototype testing will also have a public opinion survey. After the testing period, the winner will be selected by a judging panel that takes into account prototype performance, public response, and feedback from sanitation workers. The Sanitation Department adds, "The winner will be eligible to contract with the City for further design development to ensure the ability to mass-produce the basket at a reasonable cost, as well as refine technical issues." 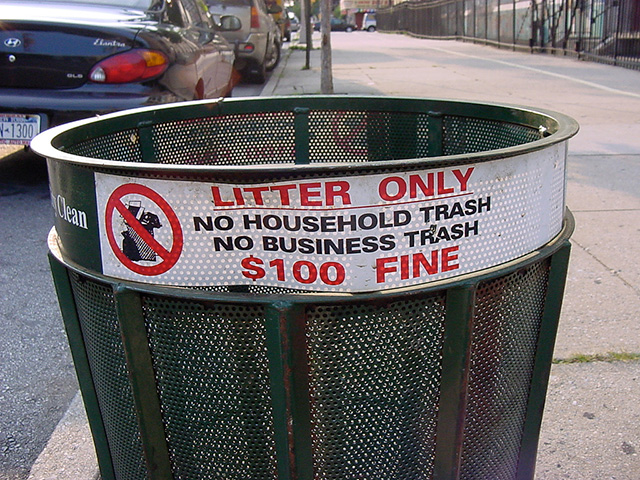 Notably, all have mesh or a mesh-style design. At a Sanitation Department open house for designers, sanitation worker Keith Prucha told AMNY why the small holes were important, "It helps a lot because when it’s raining it doesn’t fill up with water. A basket that weighs 50 pounds, when it’s raining, it can weigh upwards of 75 up to 100 pounds."

#betterbin
#litter basket
#sanitation department
#trash can
Do you know the scoop? Comment below or Send us a Tip