Here Are The Possible Routes For The Mayor's $2.5 Billion Streetcar Project

The city has said that the proposed 16-mile project could pay for itself, raising property taxes along its route. And while the concept has drawn praise from business improvement groups and transit advocates, residents from Astoria to Sunset Park have predicted that the same forces could price out working class neighbors.

Though hardly definitive, the new maps break the Brooklyn waterfront up into chunks, with pros and cons accompanying each proposed route. Some streets have more favorable characteristics than others, according to the EDC. For example, 21st Street in Astoria, seven blocks off the waterfront, is possibly wide enough to accommodate the BQX in a central lane. It's also close to the E/F/M subway at Queensbridge. Meanwhile Vernon Boulevard, right on the waterfront, is narrow, making it difficult to secure a right of way for a streetcar.

The routes will be up for discussion at community meetings along the waterfront this month.

One major criticism lobbed at the BQX since Mayor de Blasio unveiled the concept in January is that the projected ridership isn't robust enough to justify the price tag. A study published this spring by city agencies supporting the BQX projected daily ridership on the entire line to be 24,500 by 2025, and 48,900 by 2035. (And that's assuming significant crossover from local bus routes.) For context, a single train station, the 161st Street B/D/4, saw 27,020 average weekday riders in 2015.

In February the mayor told reporters that, "Even if this were a thing unto itself, it would still be adding intensely to people's options and ability to get around. A lot of people are just going to take this from one point to another without transferring. This is progress unto itself."

But these latest maps are explicitly concerned with transferability to buses and subways, as well as connection to the densest residential areas. "You'll see that in many places we're considering routes that are further upland from what was suggested in earlier proposals," said EDC spokesman Anthony Hogrebe.

"Effective connections to other forms of mass transit is one [reason]," he added. Upland streets also tend to be wider, with less prohibitive underground utility work. Regardless, much of the route is still in a flood zone. "I don't want to in any way suggest that we are moving towards a route that exists entirely outside the boundaries of a flood plain," Hogrebe said.

Project lead Adam Giambrone also told the NY Times that he's pushing for BQX right-of-way wherever possible. "We are strongly leaning toward doing everything that's practical to put this in a dedicated right of way," he said. Earlier this year, planners predicted right-of-way along 70 percent of the route.

It's still not clear if riders will be able to transfer to the BQX for free from the subway, though the EDC has said a BQX trip will be priced equivalent to a Metrocard swipe. "We are fully committed to working with the MTA towards fare integration," Hogrebe said. "Although our primary focus right now is on determining the best route for the BQX so we can move towards design and implementation." 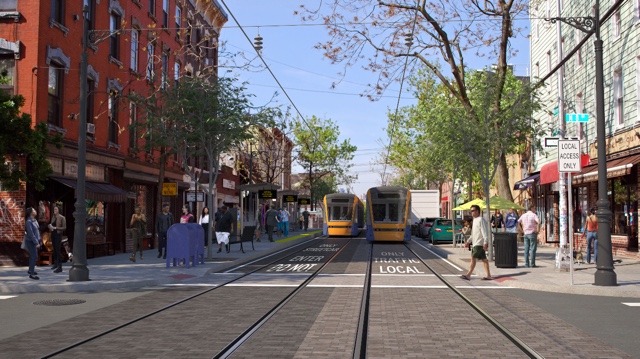 A new rendering of the BQX along one of its proposed routes, on Berry Street in Williamsburg (via EDC).

Many of the new proposed routes in Greenpoint and Williamsburg are retail and dining hubs: Kent, Wythe, Berry and Bedford Avenues are all on the list, though Kent has particularly complicated street utilities that would get in the way of construction. In Fort Greene, planners suggest possibly elevating the BQX above Tillary Street, though doing so would come with "substantial added cost."

A proposed route along Van Brunt Street in Red Hook was met with criticism this spring, as it is currently a heavily-trafficked truck route. In Sunset Park, locals are worried that a proposed route along 2nd Avenue would encourage retail and residential development in a neighborhood currently populated with auto mechanic shops and clothing manufacturers.

The maps also show possible crossing points over Newtown Creek and the Gowanus Canal. At Newtown, the EDC has proposed a new bridge connecting 2nd Street in Astoria to Franklin Street in Greenpoint, or Vernon Boulevard to Manhattan Avenue (both of which could come with new bike lanes and pedestrian crossings). The third option is a rehabilitation of the Pulaski Bridge.

At Gowanus, the map shows a possible bridge at 10th Street ("good connection to the F and G trains"), or 19th Street, which planners say would connect more quickly to Sunset Park and could incorporate new bike lanes and walking paths.

A recent report from BQX planners conceded that "extensive analysis of the bridge structures and necessary retrofits" will be necessary in order to determine if the existing bridges are structurally sound for a light rail. Both Newtown and the Gowanus Canal are Superfund sites, and therefore "may require significant remediation measures."

The EDC has suggested possible termini at Hoyt Avenue in Astoria and at the Brooklyn Army Terminal in Sunset Park, though locations for streetcar storage and repair work are still under wraps.

Throughout the spring, locals argued that they'd sooner see expanded bus routes than a major investment in new infrastructure. "Everyone loves a shiny new Tonka toy," said Sunset Park resident Elizabeth Shelton. "But you're talking about two and a half billion dollars of our money spent in a floodplain."

The city says it hopes to break ground on the BQX by 2019 at the earliest.