Here Are The Most Popular Baby Names In NYC

If you want your baby to be popular and keep up with all the A-list influencers at daycare, the first step is giving them a name that's hottt and fashionable. Bye Felicia, Madison and Theo! This baby season, it's all about Emma and Liam and Olivia and Noah. Will your baby crack the top ten most popular names this year? Or will it be relegated to the time-out room of obscurity? Let's find out.

The NYC Health Department tallied all the baby names from births in the city limits last year, and found that when it comes to boys, there was actually not much turnover in the most popular names between 2016 and 2017. Dylan and Michael dropped from the top 10, replaced by David and Jayden. The other eight were the same. Nobody likes John anymore. Guess the world's moved on. It'll come back around.

For girls, Emma knocked Olivia to second place, and Abigail replaced Madison in the 10 slot. Ava clung to relevance at number six, while Sarah, objectively the most beautiful name in the known universe, held solid at number nine. Great song, too.

No idea why Deaner and Gener aren't on this, but here are the top ten baby names for 2017 in NYC: 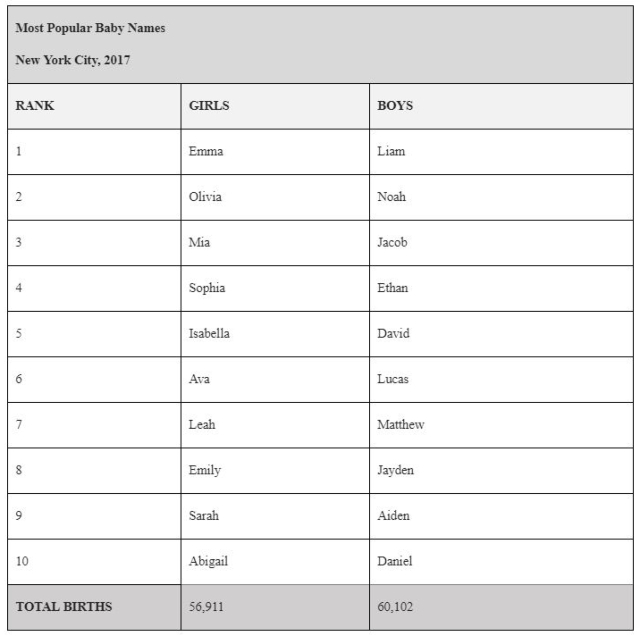 If you are having a baby and want it to be an alternative baby, here are the most rare names from last year. As few as ten parents named their daughters Artemis, Tzippy, and Reizy and sons Azriel, Zeus, and Thaddeus. 'Sup, Tzip?

If you want to make sure your baby is on-trend for your borough, here's the breakdown:

#babies
#baby names
#bart's babies
#lists
#popularity
#Tzippy
Do you know the scoop? Comment below or Send us a Tip