By now we're all familiar with the anti-democratic, unconstitutional, and unseemly things Donald Trump says he wants to do when he's president. There's the ban on Muslims entering the U.S., the implementation of the NYPD's currently banned version of stop-and-frisk nationally (to bring "law and order" to "inner cities" where "the blacks" live), the deportation force rounding up millions of undocumented immigrants, the torture of suspected terrorists and murder of their families, the "opening up" of libel laws to sue his detractors in the media, and the ban on abortions after 20 weeks, to name a few. At this point we are familiar with, if not resigned to, Trump's shortlisting of Rudy Giuliani as attorney general and Newt Gingrich as secretary of state, and Trump's plan to replace late Supreme Court judge Antonin Scalia with someone comparably bigoted.

What's harder to grasp at this point is the reality of what awesome power Trump will have, not only by dint of being president, but with the Republicans who never quite got around to condemning him in control of the House and Senate. Starting next year, Republicans will control every branch of federal government, and if Trump can manage to go a few months without re-alienating House Speaker Paul Ryan et al. over some perceived slight or Trump's heresies against conservative doctrine, they can do a lot of damage together.

Republicans don't have the 60 members they need in the Senate for their majority to be filibuster-proof, but in October, Ryan laid out how he intends to bypass Democrats to pass a budget repealing key portions of Obamacare, defunding Planned Parenthood, gutting food stamps and housing assistance programs, and cutting taxes for corporations and the top one percent of income recipients. Ryan explained that he plans to use a process known as budget reconciliation, which Republicans recently criticized Democrats for employing to pass healthcare reform.

The process is for the House and Senate to pass identical budgets, and include instructions for Congress to pass reconciliation legislation that cannot be filibustered in the Senate. Such a bill is supposed to change current law to comply with the budget's demands, but can be used to accomplish wide-ranging objectives.

Also, Republican Wisconsin Governor Scott Walker just reiterated his belief that Republicans should change the Senate rules to get rid of the filibuster, which would allow them to pass legislation with a 51-senator majority. (The conservative Heritage Foundation thinks this is "a Bad Idea.")

Trump and Ryan also want to increase military spending, presumably to "bomb the shit out of ISIS," and Trump has vowed to rescind Obama's executive order granting amnesty to the children of undocumented immigrants, and to pull the U.S. out of the limited climate accords it has agreed to. On the appointment side of things, Trump has indicated plans to make a Goldman Sachs veteran Treasury secretary, and a fellow climate-change denier may soon be shaping the leadership of Environmental Protection Agency, according to a Scientific American report. 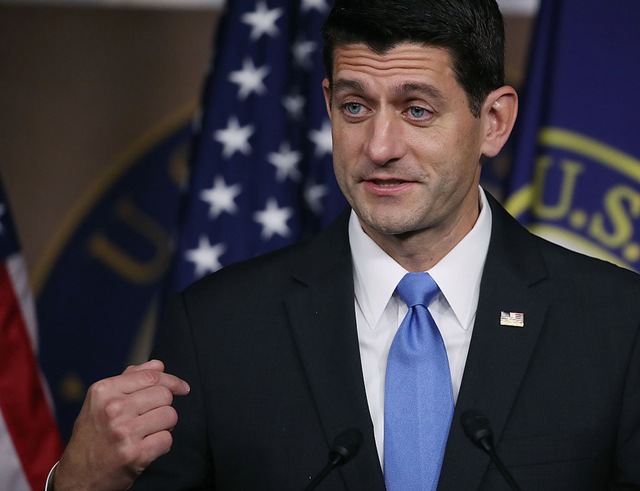 Also, little-mentioned amid Trump's blizzard of radical proposals is one to repeal the 14th Amendment, which grants citizenship to people born in this country—it also includes the equal protection clause, enacted after the Civil War, which prohibits states from denying people equal protection under the law, and is the basis for black people getting to vote, as well as: court decisions outlawing school segregation; banning racially discriminatory gerrymandering; ending laws against gay sex; legalizing abortion; and upholding elements of affirmative action.

This particular agenda item would be hard to accomplish, but there is the possibility, however remote, that the current political landscape could one day allow Trump to push through a constitutional amendment.

"Anchor baby" rhetoric and Ann Coulter's protruding Nazism aside, Republicans do not generally support the idea of repealing the 14th Amendment, and Republicans don't have two-thirds majorities in the House and Senate, but they do have control of more than two thirds of the country's state legislative chambers, and they are near a historic high of 34 of 50 governorships, with races in North Carolina and Montana still too close to call. During the first two years of a Trump presidency, the only brake on a constitutional amendment with broad Republican support would be the fact that Republicans are still six state legislatures away from controlling the three quarters they'd need to alter the federal government at its firmament.

This type of leverage makes the last year's unprecedented obstruction of the confirmation of Obama's centrist Supreme Court nominee Merrick Garland a huge victory for Republicans.

The fact that Trump could in any conceivable universe propose and pass a constitutional amendment should be deeply chilling to anyone who believes (based on the copious available evidence) that the man is a racist, narcissist, and sociopath with the attention span and civic knowledge of a second grader. Supreme Court justices we're stuck with for decades. Constitutional amendments have a way of sticking around for centuries.

On the topic of the Constitution, the ACLU published an analysis of Trump's most prominent policy proposals today, explaining how those proposals, including surveillance of mosques, rounding up immigrants, reinstating and ramping up military torture, and silencing critics, would be wildly unconstitutional.

Of course, the presidency also carries a great deal of executive power, which can be yielded without the input of others. The danger of Trump controlling our nuclear arsenal, which he has wondered aloud why we would make if we didn't intend to use, is well-established.

There is also this to consider: presidents starting with Truman have established a mechanism of taking the U.S. to war without congressional approval, and thanks to Bush and a coterie of willing intelligence spooks, have enabled a massive, extrajudicial domestic spying apparatus that the president can use at will. Obama and various intelligence types have assured us, when exposed, that all this secret spyware is being used responsibly, thank you very much, but that guy, that strongman with a long list of personal enemies and a taste for vendettas that Snowden and the rest warned us about? Trump has given us every indication he is that guy.

It's a brave new fucking world. For an idea of how to protect the privacy of your communications, the Electronic Frontier Foundation has a starter guide here. The American Civil Liberties Union is a fan of the First and Fourteenth amendments, among others. Its website is here.

We reached out to New York Sen. Charles Schumer (D), who voters reelected last night to his fourth term last night, and who will replace Harry Reid as the Senate's Democratic leader. We asked his office what Schumer plans to do to stop a Republican-controlled federal government. We got this response:

President-elect Trump called me this morning, and I congratulated him on his victory. Last night the American people exercised their sacred right to vote and made their voices known, electing Donald Trump to the Presidency, and returning Republican majorities to both Houses of Congress. I congratulate Leader McConnell and Speaker Ryan on their victories as well. I also want to offer special thanks to my dear friend Hillary Clinton for her hard fought campaign, and thank her for her incredible service to this country. She is a remarkable woman whose service is a beacon to all of us, and I know she will continue to serve the country well. This was a divisive and hard fought election, and the outcome surprised many Americans from both political parties. It is time for the country to come together and heal the bitter wounds from the campaign. Senate Democrats will spend the coming days and weeks reflecting on these results, hearing from the American people, and charting a path forward to achieve our shared goals and to defend our values.