Here Are Some Of NYC's Smelliest Neighborhoods

It's stinking hot again, which means the city reeks even more than usual. But how much more does it stink? And what different sorts of odors? How can we possibly make sense of all this overpowering olfactory information? Virginia Smith over at Brick Underground has helped sort out which neighborhoods are the smelliest, and which ones evoke the fragrance of sweet daisies, just sprung from the most organic of soils.

In Manhattan, Koreatown leads the way in smelliness, while the Meatpacking District lives up to its name in second. SoHo, home to some of the most upscale New Yorkers, does not acquit itself well in third. Though we suspect that neighborhood may also lead the pack in complainers, so this ranking may be skewed. 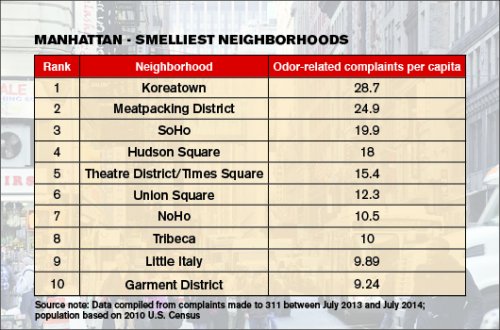 In Queens, Malba took home the smelliest award, while Lindenwood and Neponsit came in second and third respectively. Apparently water seems to be a big theme for odor complaints. These neighborhoods also match up, unsurprisingly, to the sewer flooding data we explored last week, which could explain some of the persistent odor. 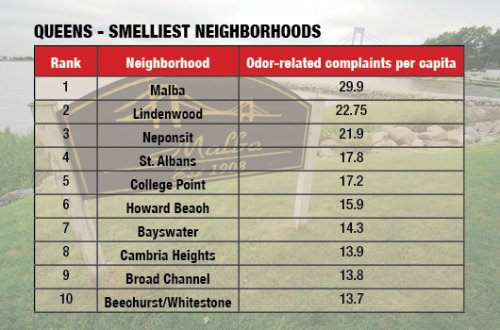 Which brings us to Brooklyn, where Marty Markowitz's expressway signs would like to remind you that it's "Not Just A Borough, But An Olfactory Experience." Greenwood Heights, as mentioned, leads the way, with the Brooklyn Navy Yard and Vinegar Hill coming in second and third. Again, water is a theme, as well as proximity to technology start-ups and stores that specialize in paper dolls. 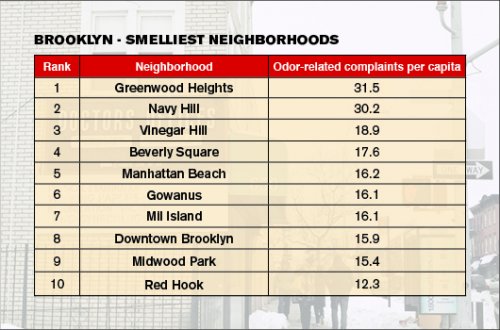 Believe the hype! About the smell!

But within a few months, the frigid fingers of old man winter will close around our necks, reminding us that it is a privilege to be able to stay outside long enough to smell without our nostrils becoming numb. Enjoy your warming stench while it lasts, New York!

#311
#Neighborhoods
#real estate
#smells
Do you know the scoop? Comment below or Send us a Tip