You've seen the placards around town, beside the front door on apartment buildings, post offices, and schools. 50 years ago, when Nelson A. Rockefeller was governor and fear of imminent nuclear annihilation was running high, New York boasted tens of thousands, possibly even hundreds of thousands—no one is exactly sure—of nuclear fallout shelters. 2017 is not exactly Cold War Pt. II, but now that some Democrats are suddenly intent on saber-rattling with Russia and the newly elected president is a longtime conspiracy theorist who as commander-in-chief has repeatedly called for expanding the U.S.'s nuke arsenal, you'd be forgiven for having a bit more of a paranoid mindset at the moment.

So what shape are these shelters in? Exactly how safe would we be in the event of some sort of nuclear attack? 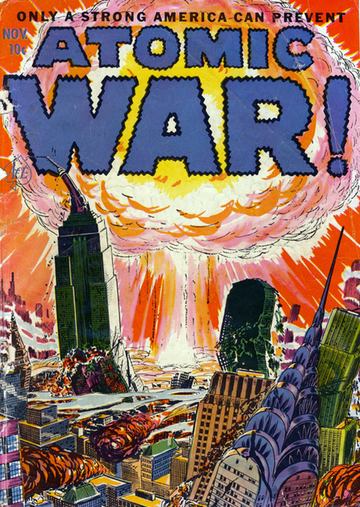 The "good news," and one of the many reasons the fallout shelter program was scrapped, is that New York is the U.S.'s densest and most populous urban center and, as such, would be high on the list of targets for a nuclear attack. In other words, if the U.S. was attacked by one of the world's nuclear superpowers, rather than having to hide out underground for weeks, then trek through the irradiated landscape ducking air strikes and keeping up with the doings of the remaining members of the Freedom Caucus operating out of a shipping container in Annapolis, we'd probably all be vaporized instantly.

But what if somebody dropped a smaller bomb, or New York somehow dodged the bullet?

First, it's probably good to have some background.

In the late 1950s and early 1960s, paranoia ran so high that the feds conducted compulsory air raid drills around the country, including in New York City, having police arrest those who refused to duck inside when the sirens sounded. John F. Kennedy created a nationwide shelter program as president in 1961, and in 1963, the Cuban missile crisis kicked off the proliferation of shelters in the city in earnest.

Under the program, inspectors surveyed buildings to see if they could withstand the after-effects of a nuclear blast. In the beginning, identifying and certifying shelters was the domain of local civil defense authorities. Once certified, the government would provide a placard and some goodies to tide over the huddled masses.

While most landlords took part in the fallout shelter drive, even they still had to navigate bureaucracy. By 1966, the city's civil defense director found that most of the shelters had no supplies. ''Personally, I have grave doubts that shelter-stocking is a meaningful answer for New York City in the event of nuclear war,'' he said.

Money was a key issue. Early on in the cold war, the federal government had decided not to build mass bomb shelters in urban areas, opting instead to promote the suburban backyard shelter. 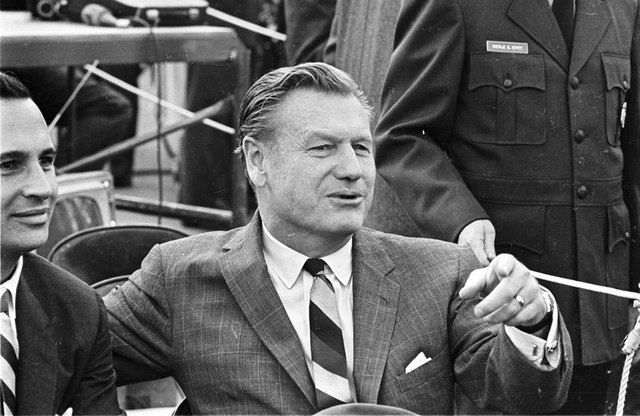 As governor of New York, Nelson A. Rockefeller was big on fallout shelters. (Harry Benson/Getty)

Rockefeller was a big proponent of shelters, so much so that he reportedly had shelters built under the Executive Mansion in Albany, and at his homes in Maine and Westchester County, as well as his three-story apartment on Fifth Avenue overlooking Central Park (representatives of two of the former Rockefeller estates in Westchester say they are unaware of such a shelter on the grounds of either). As governor, Rockefeller was able to shake loose $15 million in state funding for shelters, but the program was still essentially based on building owners opting in.

The results, according to Jeff Schlegelmilch, deputy director of the National Center for Disaster Preparedness at the Earth Institute of Columbia University, were mixed.

"An ideal shelter would be a room enclosed in a building, no windows or anything like that. It would basically keep certain kinds of radiation from penetrating," he said. "So if you're in a big concrete building, something towards the center. Some of the more advanced ones would have a ventilation system, some of them would have sleeping areas, and food and water on shelves."

However, there were no federal standards that Schlegelmilch has been able to find in his research, and there was not a lot of communication between local defense authorities.

"It's all over the map in terms of how well they were designed," he said. "I've heard stories of some where they were in the basement with sewage pipes dripping down and rats running around...The public ones are probably just large enclosed spaces where they're able to accommodate a large number of people in a very municipal fashion." 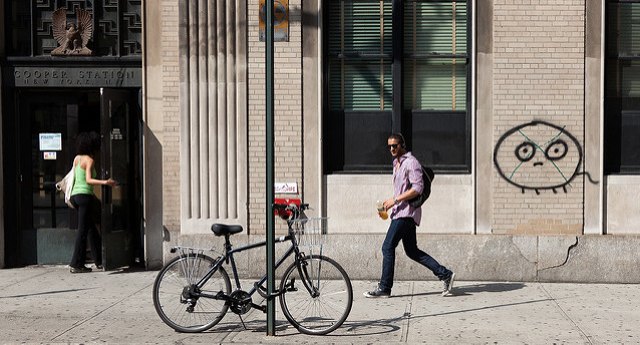 Shelters that could accommodate thousands included ones under the Cooper Station post office, on the 43rd floor of the Waldorf Astoria (!), under the Lindsay Park cooperative complex in Williamsburg, and under the Chase Manhattan headquarters at 28 Liberty Street. We tried getting access to these neat-sounding spaces, without luck, but a Postal Service spokesman informs us that the basement space at Cooper Station has been turned over to mail operations. Rockefeller's Manhattan apartment has been carved up, and we couldn't reach the owners, nor could we get the Chinese investors who own the Waldorf or the Liberty Street building. As a general rule, Schlegelmilch pointed out, Manhattan floorspace doesn't stay vacant for long.

In 2006, workers fixing the Brooklyn Bridge stumbled into a vault stocked with boxes of high-calorie crackers and water barrels that could be reused as toilets. The Department of Transportation wouldn't let us take a peek at that space, either. The DOT says it has donated the goods to a civil defense museum (spokespeople wouldn't specify which one).

We did get access to the fallout-shelter-designated basement at 80 New York Avenue in Crown Heights, where tenants are in a pitched but unrelated battle with their landlords, and what we found did not exactly inspire confidence.

"I don't think we would last very long," said resident Nathan Pensler, looking around the half-finished space. "I could see a lot of downsides."

For one, the basement is actually a sub-basement, with windows coming around three feet down from the ceiling. If there was an enclosed concrete room down there once, it's not there now. Now storage for bicycles, construction materials, and some non-working washing machines, the basement also takes on water when it rains, possibly through an air-shaft that inexplicably has wires strung up through it. The cellar has served as shelter for at least one person, though: Pensler said that until recently, a door to the basement didn't lock and a homeless man took up residence down there. He seems to have left behind a cellphone and two suitcases. 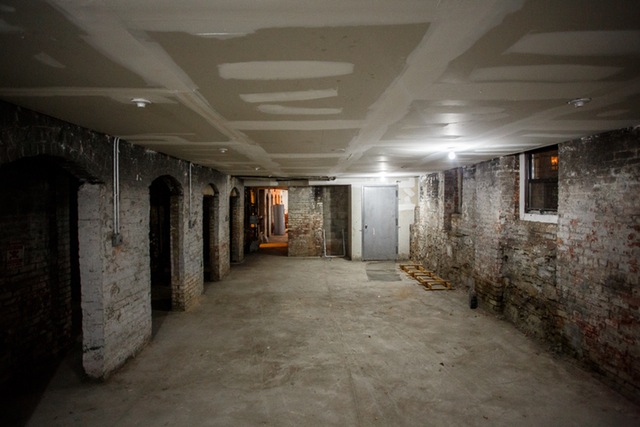 Before my visit, Pensler hadn't given the role of the space in a nuclear holocaust much thought.

"I remember seeing the [fallout shelter] sign and thinking, 'That looks like the kind of sign that somebody would steal and put in their bedroom,'" he said. "That's literally the only thing I've thought about it."

Most city fallout shelters seem to have shared the same fate—even if they were once fully stocked with All-Purpose Survival Crackers and barrel commodes, they've long since been returned to use as laundry rooms, storage areas, and illegal basement apartments. Even in 1976, the shelters were largely forgotten. A Times reporter surveying them that year described them in bemused, hey-didja-know-about-this-old-thing terms:

Of course, the shelter areas could, if worse came to worse, still be used. But the Government makes no effort to keep them supplied with food or other necessities. And officials no longer keep an up‐to‐date list. If, for example, a building is torn down, the Government has no record to indicate the loss of a designated shelter.

In the years leading up to that story, the city, defense authorities, and federal government, lacking money to restock the shelters, had faced bureaucratic hurdles in trying to sell off or donate the food—a lot had already gone bad—medical supplies, and toilet paper, which were technically government property and subject to stringent rules. In 1975, the city sent workers into 13,000 shelters to take the phenobarbital (downers) out of first aid kits, because junkies and good-time seekers had been breaking in and stealing the drugs. The feds did eventually consolidate control over the civil defense authorities into a central agency, but by 1969, Congress stopped appropriating money for the program, and in 1979, that agency was formally disbanded. Nobody much noticed.

In addition to questions about the wisdom of pouring millions of dollars into urban infrastructure that was likely to be annihilated, as fallout shelters fell out of favor, experts began to question the psychological repercussions of large groups of people living in a small space for an extended period of time.

"Even if you are lucky enough that you were able to get to a fallout shelter and it was in the zone where it was protected but not in the fireball of the explosion itself, you then had to live in very confined spaces for what could be a couple of weeks," Schlegelmilch said. 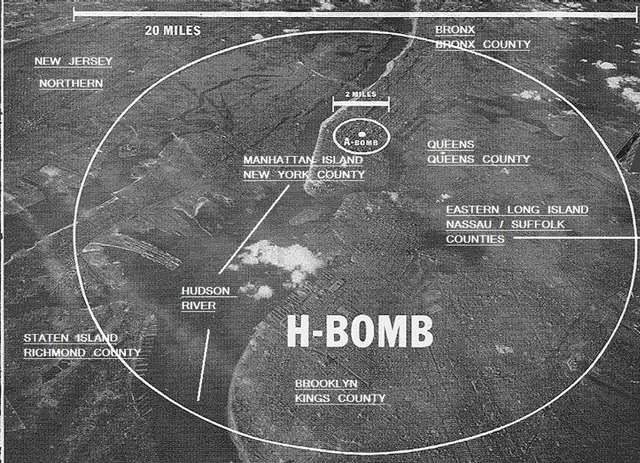 A still from the 1957 TV movie A Day Called X, about a nuclear attack on Portland, Oregon. (Boing Boing)

Nowadays, federal disaster officials advise survivors near nuclear bomb blasts to shelter in place to avoid fallout—the further down and towards the center of the building the better—and evacuate at a time to be announced by officials based on the post-nuke conditions. The official guidelines on this stuff make for hair-raising reading. For example:

Outside of the most hazardous areas of the [Dangerous Fallout] zone, early evacuation (t < 24 hours) should be discouraged by response officials. However, guidance can be provided to those who choose to evacuate in spite of these warnings. Information concerning route conditions (e.g., rubble and debris in streets, collapsed bridges, and other obstacles to mobility) will assist those who decide to evacuate, and perhaps dissuade those who might choose a risky departure from shelter. When planned evacuations are initiated, these should be staged. Attempting to evacuate an excessively large area could divert resources from the higher dose rate regions closer to the detonation that deserve the greatest attention. A poorly planned evacuation could result in excessive radiation dose and even unnecessary fatalities due to radiation or other unforeseen hazards.

Schlegelmilch said that the information the disaster preparedness information the feds have compiled and made publicly available is solid, but public awareness is sorely lacking.

"The availability of information isn’t the issue, it’s having a conversation about it," he said, adding, "How would you as a City Council member or as a mayor say, 'Hey, let's talk about what our city would do in the event of a nuclear attack'?...These are extremely rare, extremely unlikely, but extremely high-consequence events...And then layering in all the added politics with nuclear proliferation and terrorism and election cycles just makes it that much harder to have that conversation."

For what it's worth, Schlegelmilch says there are roughly three tiers of nuclear attacks: those carried out with the largest nuclear weapons, possessed only by state actors, which "would basically wipe out the whole city"; nuclear bombs that are 10 kilotons or smaller, including suitcase bombs, which could outright destroy several blocks to several square miles of the city; and so-called dirty bombs, which would do a relatively small amount of damage but throw off some radiation. Also, the Indian Point nuclear power plant is 20 miles north of the Bronx and notoriously creaky. It is on track to be closed down by 2021.

The immediate reaction to officials broaching the subject of nuclear preparedness, Schlegelmilch said, is, "What do you know that I don't know?" Well, now at least you know what's going on with those placards on buildings.