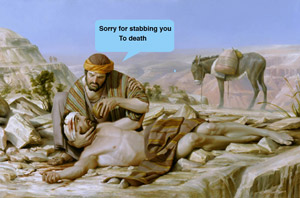 A New York State senator is proposing a law that makes criminals legally responsible for the inadvertent harm to helpful bystanders who might come to the aid of a person under attack. The proposal comes in the wake of the death of Flonarza Byas, who may have been killed by Maurice Parks while he was defending himself during a robbery.

The media are calling this a strengthening of the Good Samaritan law, but when we think of that, we think of the law against not helping someone in obvious need. That's the law that got the Seinfeld Four locked up during that show's series finale after they laughed at a fat man being robbed as they videotaped the crime.

The newly proposed law stems from the death of Flonarza Byas, who may have been killed by subway conductor Maurice Parks. A number of men attempted to rob Parks earlier one morning this month, unaware that Parks was trained in the martial arts, had previously shot a mugger years ago, and was carrying a knife for self defense. In the ensuing mano a mano combat, Parks may have been the man who fatally stabbed Byas, who may have been coming to the aid of either Parks or the men he was defending himself from.

In the mind of Sen. Eric Adams, who exactly killed Byas is a moot point. The law he is proposing is meant to hold the people who initiate criminal action to be held accountable for its consequences, whoever is injured or killed as a result.