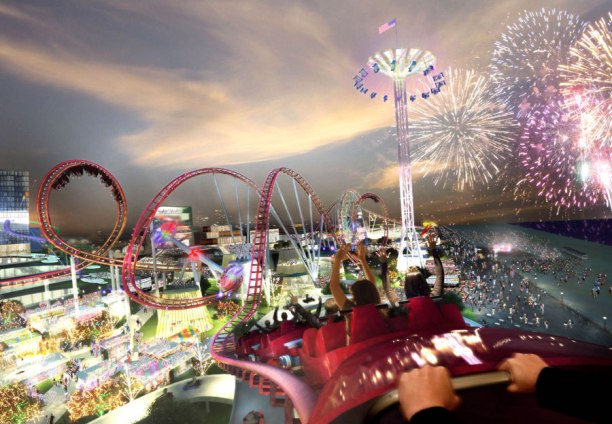 Another over-the-top Coney Island development proposal is in the works. Mayor Bloomberg unveiled a plan today to build the nation's biggest urban amusement park there, including 4,500 residential units (20 percent are set-asides for low- and middle-income housing) and some retail establishments. The proposal basically spells doom for Thor Equities' $1.5 million Vegas-style entertainment complex that can only get built if the city provides zoning for it.

Don't worry, the Cyclone isn't going anywhere. Neither is the Wonder Wheel. They'll just be joined by new attractions like a 262-foot high Parachute Jump and a skating rink. The Mayor said, "When you combine that with the aquarium and with KeySpan Park, we will have 50 contiguous acres of public park with the best in recreation that Brooklyn or New York has to offer." 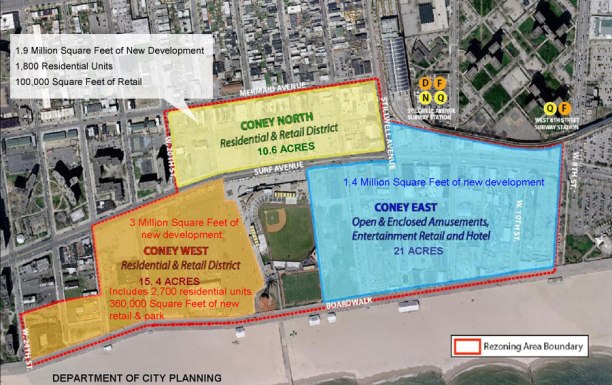 The city is rezoning 47 acres from W. 24th St. to the aquarium, and there are new names, like Coney North, Coney East and Coney West. Fifteen of those acres, according to the NY Post, is owned by Thor CEO Joe Sitt. Before developing the amusement park, the city would have to acquire Sitt's land and other privately-owned parcels (Deputy Mayor Dan Doctoroff said, "Sitt will be afforded the opportunity to swap his land for another parcel, or for cash, at a premium"). There are apparently hotels, performance venues, restaurants and a movie theater in the works for land directly above the new park near Surf Ave.