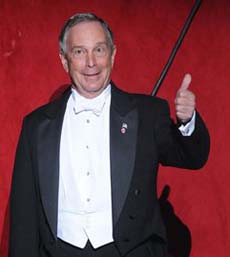 Update, 4:35 p.m.: The City Council voted 29 votes in favor of extending term limits, to 22 votes against. Each member had the opportunity to explain their votes. Council member James Oddo, who voted against the legislation, wished he had some f-bombs left over and quoted the West Wing: "Quando dio vuole castigarci ci manda quello che desideriamo."/ "When the gods wish to punish us they answer our prayers." (Oddo said he hoped the gods were busy today.)

Today, the majority of the City Council decided to give the people of New York a fuller choice in the November, 2009 election. I believe that was the right choice, and I want to thank Speaker Quinn for her leadership. Those of us who work on both sides of City Hall must now move forward with the important decisions that face us, particularly finding ways to soften the fallout from the economic downturn and balancing our budget as revenues decline. We have a lot of work to do together to get New York through these tough times.

And then he went home to count his billions!

Earlier: So far, the City Council has voted to reject an amendment that would have called for a public referendum on term limits, the Times is reporting. The vote was 28 to 22, with one member, James Sanders Jr. of Queens, abstaining on the amendment, which would allow a public say on the decision to extend term limits from two terms to three for the elected positions, including Mayor and City Council.

The Council is now debating the main bill, which would simply abolish term limits without any meddlesome direct "voting" from citizens. Mayor Bloomberg officially started his push for a third term on September 30, and had said term limits could be changed by the Council, claiming it was too late for it to be put on the ballot.

While giving a speech endorsing the bill, council speaker Christine Quinn was booed and jeered from the balcony—which was standing-room only—when she insisted it was "ludicrous" to suggest the bill was the fruit of a "back-room deal." Not only did she claim there had been plenty of transparency during "two, well-attended public hearings, 20 hours of public hearings and a vigorous debate... Support for this bill is broad and deep," she also invoked President Bush. Politicker NY reports Quinn tried to find a positive about her term limits turnabout, "Many of us, myself included, have been highly critical of our president. When facts change, he won’t change his position on different matters."

The Times also reports that most New Yorkers were excluded from the meeting, which was not held in a bigger space despite enormous public interest. Even Gene Russianoff of the Straphanger's Campaign (and the senior attorney with a government watchdog group opposed to the term limits extension) was rebuffed and had to pull strings with council staff members to get up in the balconey: “I was able to get in because of the relationship I have with some people on the staff here. But the average New Yorker would not have fared as well as I did. That’s a problem for the average New Yorker who wants to participate in the process."

Here is NY1's tally of how the members voted. Terms limits had been voted on by NYC residents twice in the 1990s, with voters supporting a two-term limit both times. While billionaire Ronald Lauder poured millions into bringing about the limits, he supports the idea of a third Bloomberg term because of the economic issues facing the city. (Lauder is not so keen about other elected officials getting a third term, though.)

#City Council
#mayor bloomberg
#term limits
#third term
Do you know the scoop? Comment below or Send us a Tip