A Chicago billionaire has bought the most expensive home in the country: a Manhattan apartment still under construction.

Ken Griffin is paying $238 million for a four-story penthouse at 220 Central Park South. According to the Wall Street Journal, "The apartment spans roughly 24,000 square feet, and is being delivered unfurnished as a white box, according to a person familiar with the deal."

Griffin founded the hedge fund Citadel, which manages more than $30 billion. Last year, he bought a $58.75 million apartment in Chicago, where Citadel is headquartered, and earlier this month bought a $122 million London mansion. He also has about $250 million in Palm Beach, Florida property.

And in 2015, he bought two apartments at the Faena House (where Kanye West recently bought a home) in Miami for $60 million, and then put them on the market for $73 million the following year.

A spokeswoman for Citadel told the WSJ that the hedge fund "is expanding its presence in New York with its new office at 425 Park Avenue, and Mr. Griffin was looking for a place to stay when he’s in town." Yes, a little pied à terre with "16 bedrooms, 17 bathrooms, five balconies." Amenities include "private dining rooms, an athletic club, a juice bar, a library, a basketball court, a golf simulator and a children’s play area."

Griffin's purchase beat the last record for most expensive apartment sale in NYC, which was the $100+ million apartment at 157 West 57th Street, bought by Dell Computer founder Michael Dell. 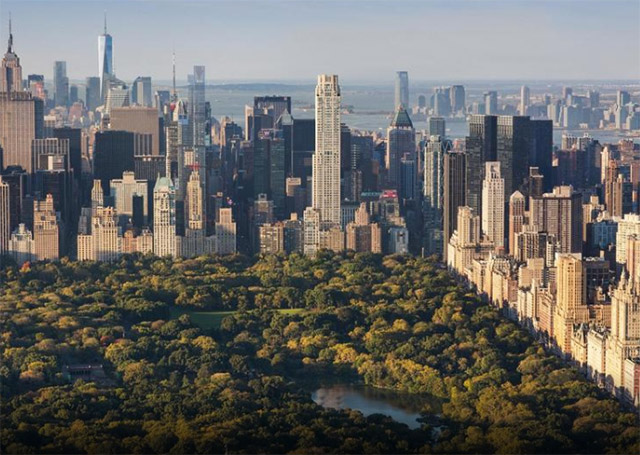 Griffin actually bought the home a few years ago, but the closing was recently finalized. The Times reports that "Sales of this magnitude can take years to close, because the purchase was made while the building was beginning construction, and the buyer probably had significant input on the final layout, [real estate appraiser Jonathan Miller] said."

Meanwhile, some 63,000 New Yorker City residents do not have a home, 23,000 of them children. An "affordable" two-bedroom apartment under Mayor Bill de Blasio's housing program rents for $1,045/month for a family of three with a yearly income of $47,000—and that's if you win the lottery.

#220 central park south
#ken griffin
#real estate
Do you know the scoop? Comment below or Send us a Tip